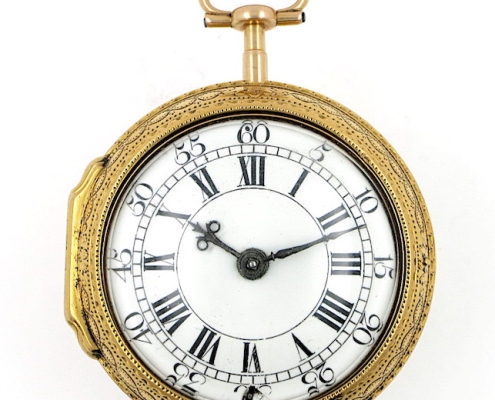 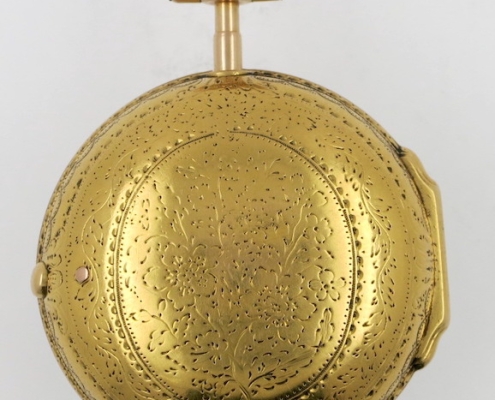 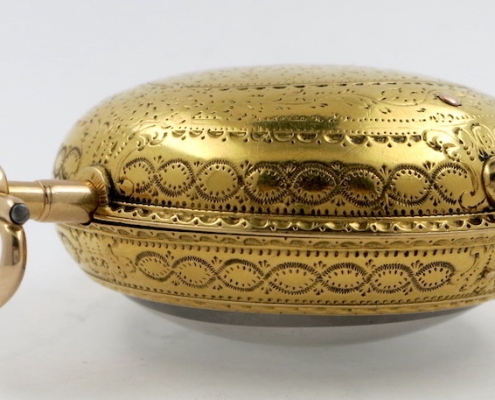 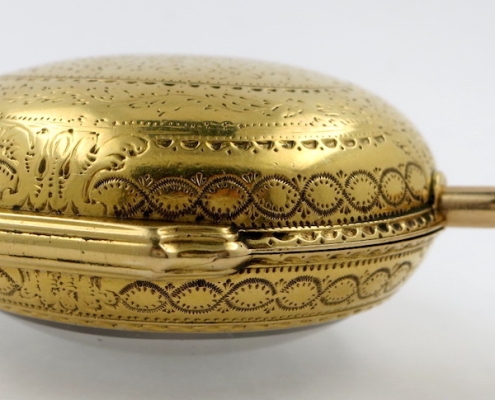 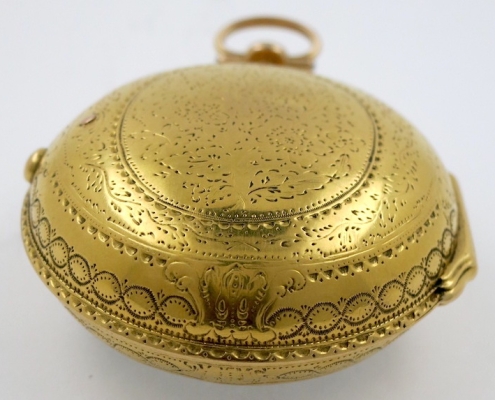 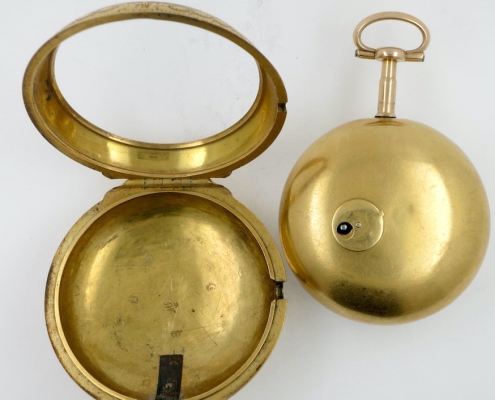 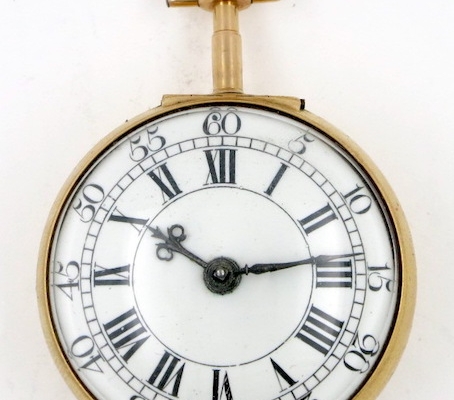 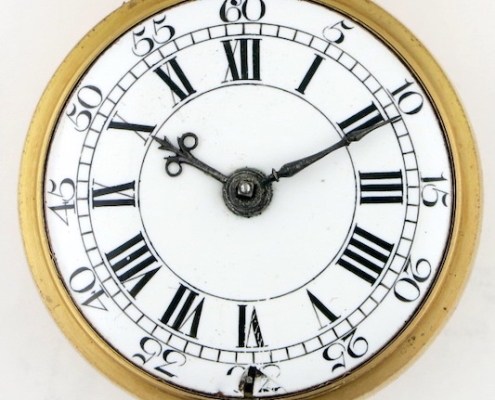 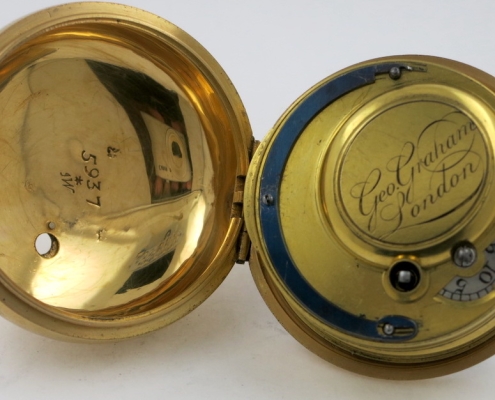 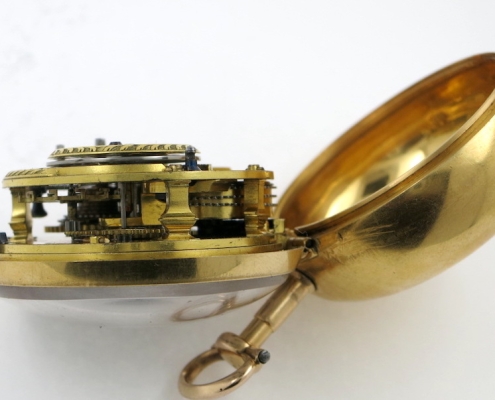 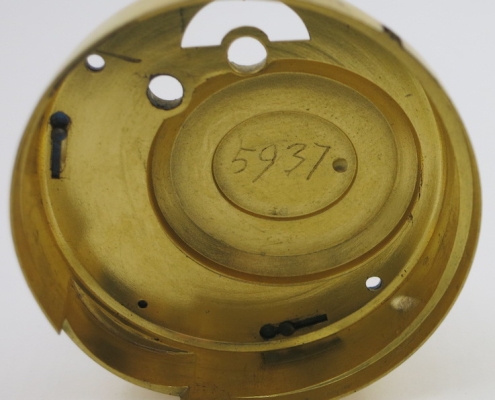 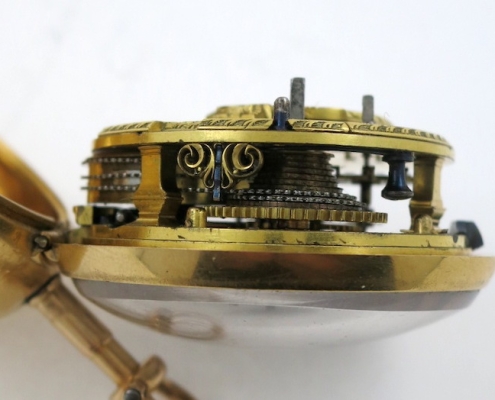 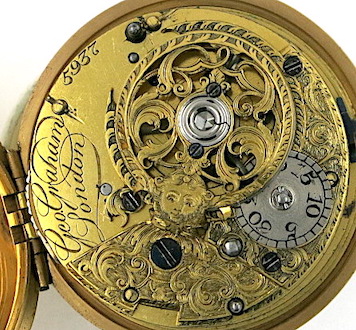 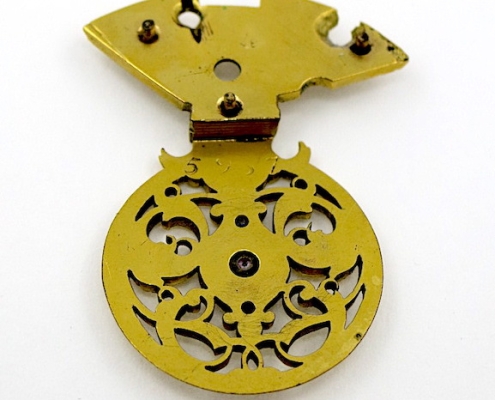 The serial number (5937) is also engraved on the underside of the balance cock table, and again on the dial plate. An interesting feature of the balance is the hairspring stud which has a square section hole and pin, rather than the normal round section. The use of square pins was first used by Thomas Tompion.

The movement is protected by a removable gilt dustcap, signed as the movement. Scratch marked (5937) on the back.

All in very good condition, and running well.

DIAL : Fine white enamel dial, again in excellent condition., with just some damage and rubbing around the catch at 6. This dial is possibly original to the movement, if so making it a very early example of an English enamel dial.

Worn gold hallmarks for London, 1740. The serial number (5937) is stamped on the case, with case maker’s marks IW with star above.

In good condition throughout. The high dome crystal is fine.

OUTER CASE : Again 22ct.gold, with more distinct gold hallmarks for 1740. Bright cut engraving to the back and bezel.

Very good condition throughout. The well executed engraving to the outer case may be slightly later, of a style more often seen in the later 18th century.

The gold cases are quite heavy, at just over 70 gms.

This watch is remarkably similar to another example that we sold previously, even with the same case maker. This was No. 5941 (just 4 numbers later), also with an original enamel dial.

REFERENCE : This watch is listed in “Thomas Tompion 300 Years” by Jeremy Evans, Jonathan Carter & Ben Wright. This excellent book includes lists of movement serial numbers for Tompion and his successors.

The watch comes with import papers to Canada from Malcolm Gardiner, Sevenoaks, Kent (Predecessor of Charles Allix). Sold in 1933. Also correspondence from the previous owner relating to the watch.