George Graham was born in Cumberland (probably the Kirklinton district) in 1673 (or 1674) and was the son of Isabel and George senior, a Quaker, who died in 1679. Isabel was George senior’s second wife.

Graham was apprenticed to Henry Aske of St.Martin’s, Ludgate on 2nd July, 1688.

He was mentored by Thomas Tompion, who he joined in about 1696, at Tompions’s premises at the corner of Water Lane and Fleet Street. Graham went on to marry Tompion’s niece, Elizabeth Tompion, on 25th September, 1704. On Tompion’s death in 1713, Graham took over the business and in 1720 moved to new premises in Fleet Street.

Graham became a Freeman of the Clockmaker’s Company in 1695, and Master in 1720. He was elected a Fellow of the Royal Society in 1721.

A very important and influential English watch and clockmaker, Graham developed the cylinder escapement. He was also an important geophysicist, and in 1730 loaned John Harrison around £200 to begin work on H1, his marine timepiece.

Graham made watches with verge escapements up until 1726, after which he used mainly cylinders. His watches nearly always show the serial number repeated on the pillar plate and beneath the balance cock.

George Graham died on 16th November, 1751 at his house in Fleet Street, and is buried alongside Thomas Tompion in Westminster Abbey. 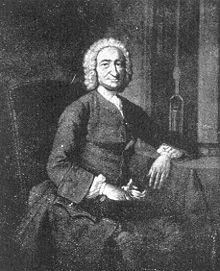 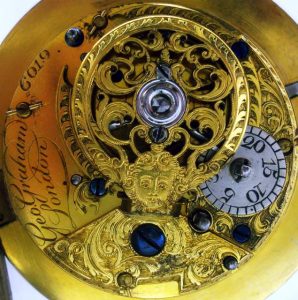