Joseph married Mary and they had six children, Thomas, Joseph, Mary, Elizabeth, and two Annes (the first died when just a few days old). In the tax assessments on 1672, Joseph is shown as a householder in Blow Bladder Street of St. Martin le Grand. A later tax assessment of 1695 shows the Windmills family as resident in the parish of All Hallows, Barking, By the Tower. At this time Joseph and Mary had their first four children.

Joseph took Thomas, his son, into apprenticeship in 1686, suggesting that Thomas was probably born in about 1672. Thomas became a partner in the business in about 1700.

Joseph died in 1723 and was buried at All Hallows By the Tower.

Thomas became free of the Clockmakers’ Company in 1695, and also became Master, in 1718.

Other than Thomas, there were probably three other makers brought into partnership within the Windmills business at various times. The first, Thomas Bennet is said to have been between 1720 and 1730. William Elkins, an ex apprentice of John Ellicott Snr., was a partner in about 1725 and then William Wightman, one of Joseph’s apprentices, between 1725 and 1730.

Thomas was presumably a bachelor and had no children. He resided at some time in Tottenham High Cross.

He died in 1737 and was also buried at All Hallows By the Tower. Unfortunately the churchyard has long since been destroyed and there is no trace of a family tomb or any inscriptions in the church. 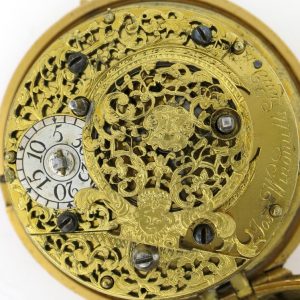 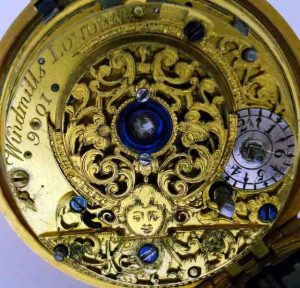