The Webster family of clock and watch makers

The history of the Webster family is interesting because the business, established in 1711 at Exchange Alley London, was handed down from father to son for nearly 200 years. There were many members of the family involved in clock and watch making, but the following are probably the most noteworthy.

The first Webster recorded in the Clockmakers Company is Robert who became free in 1675 as a Brother of the Company. This suggests that, like Tompion, he belonged to the Blacksmiths’ Company, probably making turret clocks.

Robert lived with his wife, Elizabeth and their children, in Red Cross Street in the parish of St. Giles, Cripplegate Without, and was known to employ his sons and four daughters as apprentices. These included George, Anne, Margaret, Mary and Sarah. However Margaret appears to be the only girl who qualified as a clockmaker. This was in 1711, but Sarah commenced her apprenticeship in 1688. The girls in those days were proficient in making the tiny chains for watch fusees, work requiring patience and skill.

Robert had a thriving business and took on many apprentices. In 1695 he added his signature to the Association Oath Roll of the London Clockmakers Company against the Jacobean regime. A copy of the many signatures may be seen in Symonds’ classic, “Thomas Tompion: His Life and Work”.

Robert took a great interest in the Clockmakers Company, becoming Steward in 1688, and between 1697 and 1704 he was elected progressively, Assistant, Younger Warden, Renter Warden, Upper Warden, and finally Master in 1704, the year following the election of Thomas Tompion as Master, with whom he must have been well acquainted.

No doubt his close association with Tompion assisted William Webster (I) to become apprenticed to Tompion.

William, of the same family as Robert (possibly cousin), was the son of Daniel, a clothworker in St. Mary Matfellon, alias Whitechapel, who died before William was apprenticed to Peter Webster, son of Richard of Whittington, near Chesterfield in Derbyshire.

William, apprenticed to John Barnet in March 1701, transferred to Thomas Tompion, completing his apprenticeship and later serving as a journeyman (independent maker working within the master’s workshop), thus spending a long time in devotion to the principles of his craft. He was free of the Clockmakers Company in 1710, and Junior Warden in 1734. It was not until 1711 that he set up for himself in Exchange Alley where the business was carried on until after 1800.

Tompion’s death was referenced in the advertisement placed by Webster in the London Gazette, 24th November 1713 (4 days after Tompion’s death), which read :

“On the twentieth Instant, Mr. Tompion, noted for making all sorts of the best Clocks and Watches, departed this Life : This is to certify all Persons of whatever Quality or Distinction, that William Webster, at the Dial and Three Crowns in Exchange Alley, London, served as a Journeyman a considerable time with the said Mr. Tompion, and by his Industry and Care is fully acquainted with his secrets in the said Art”.

This reveals how highly he thought of his master. A miniature clock, with a beautifully engraved backplate bears the message :” William Webster, from ye late Mr. Tho: Tompion, Londini.”

William took an interest in the Clockmakers Company, being elected a Junior Warden on September 30th 1734, but within a year he suffered a serious illness and died during his term of office. In the Daily Journal of August 14th 1735, there is this notice :

William Webster II, son of William Webster I, was apprenticed to his father on 15th January 1727, becoming free of the Clockmakers Company in 1734. He likewise was distinguished in his craft, and living longer than his father, made numerous clocks and watches of various types, of which many still survive. He married a relation, Sarah Webster, in 1739, and incorporated his wife’s coat of arms with his own in his seal of 1742.   This seal was in use a hundred years later and was based on an old coat of arms of a Webster who had lived in the reign of Elizabeth I.

William became Junior Warden of the Clockmakers Company in 1752 and was elected Master in 1755. He abandoned the verge movement in his watches for the cylinder. His clocks and watches are of a very fine quality and appearance. One such is a musical clock which plays 24 tunes on three brass pin barrels. It is believed that only four of these musical clocks, playing 24 tunes, were made.

William Webster’s gold watches are of very fine quality and appearance. He employed the renowned George Michael Moser, Keeper of the Royal Academy, to do the repousse work of the outer cases which are often signed by this artist.

Barometers and sun dials were also made by the company. During this period William II began to leave out his address (Exchange Alley) as he probably felt it unnecessary. He died in 1776.

William and Sarah Webster had two sons, William III and Richard. William III died soon after his father and Richard continued the business. He became free of the Clockmakers Company in 1779. Richard died in 1807, and was succeeded by his son, Richard II. 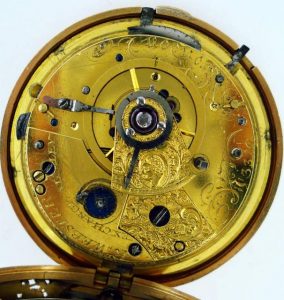