Daniel Ray was baptised at St. Peter’s Church, Sudbury, Suffolk in 1763. His father William, and other members of the family, including Daniel senior, were watchmakers in Suffolk.

Although it is not known where he was apprenticed, his brother, William Redmore Ray, is recorded as being apprenticed at Holborn Hill (Clockmakers’ Company). In 1788 Daniel was admitted as a Freeman of the Borough of Sudbury, when he was described as ‘Daniel Ray, watchmaker of London’. It was probably while in London, that he married Lydia who was from Middlesex.

William was destined to inherit the family business, so Daniel moved to Battle in Sussex where, in 1790, he lived with Thomas Keeley, watchmaker. In April, 1790, Daniel Ray took on the premises of 66 High Street, formally occupied by John Cheeseman, watchmaker. His first child, Mary, was born later that year. Ray held various civic offices in Battle, including Headborough of Middle Borough, Overseer for the poor, Ale Conner and Constable for the Hundred of Battle.

Daniel was more concerned with watches than clocks, and in April 1799 he had the following advertisement published in the Sussex Weekly Advertiser :

‘Wanted: a journeyman watchmaker who has been used to job in a country shop and can occasionally repair clocks. For further particulars enquire at Daniel Ray, watchmaker, Battle Sussex.’

Daniel Ray has at least five children, Mary, William, John and twins, Elizabeth and Henrietta. The twins were only one year old when Daniel died at the age of only 46, in October, 1809. He is buried in Battle churchyard. He died intestate and his house was inherited by his younger son John. After Daniel’s death, his widow Lydia continued the business and also added to it the business of stationer. She continued the Battle business until 1845 and was described in the 1851 Census as ‘retired silversmith’. 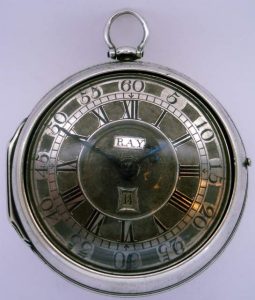