James McCabe, son of Patrick McCabe, was born in about 1748, in Northern Ireland, probably in the small town of Lurgan. Patrick McCabe made clocks and watches in Lugan and taught his three sons the trade.

James was working in Belfast around 1770, with his brother Thomas. James moved to London in 1775 with a new business in Fleet Street. He married Elizabeth Burn on 20th June, 1779, and by 1794 had six children and the family had moved to Stoke Newington. In 1802 the business moved to the Royal Exchange, where it continued for the rest of McCabe’s life.

McCabe was freed of the Watchmakers’ Company in 1781. His firms’ names and addresses, during his lifetime, were :

James McCabe used verge, cylinder and duplex movements, some with repeating work. The following is a rough guide to serial numbers used :

McCabe died in Stoke Newington on 6th October, 1811, reportedly of “mortification of the leg”. He was survived by his wife and eleven of their thirteen children. The family remained at Stoke Newington until Elizabeth died on 20th May, 1833. The business was inherited by the youngest surviving son, Robert.

Brian Loomes. Watchmakers and Clockmakers of the World (NAG Press, 2006 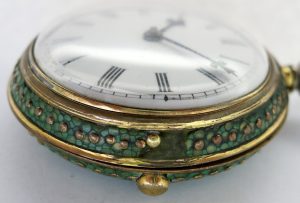 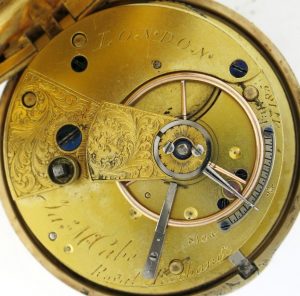