Justin Vulliamy was born in Switzerland, in an area formerly known as the Pay de Vaud, which was renowned for excellent watchmaking. He moved to Paris and made watches there, but when George Graham invented the horizontal escapement (later known as the cylinder) he came to London (about 1730), to make himself better acquainted with it.

At this time he became associated with Benjamin Gray whom he knew for several years before joining him at “Ye sign of Ye Sun Diall”. Gray was Watchmaker to King George II.

Francois Justin Vulliamy was proud of his ancestry, and took the lead in permanently establishing the Swiss Church in London in 1762. He was President of the Committee of the Church from its foundation till his death. He presented a clock to the original church and this clock is now in the vestibule of the present church in Endell Street, London, where there is also a a plaque to the “Memory of its Founder, Francois Justin Vulliamy”.

During the partnership of Gray and Vulliamy, their products were signed “Benj’n Gray and Justin Vulliamy”. On the death of Gray in 1764 the full signature or the shortened version “Just. Vulliamy” was used. The significance of this is that , except for a few very high quality movements, the products of his son and grandson (Benjamin and Benjamin Lewis Vulliamy) were simply signed “Vulliamy”.

The death of Justin took place on 1st December, 1797. During his whole of his life in London he used the premises in Pall Mall that had been taken on by Gray, and from which place the family conducted the business until the death of Benjamin Lewis Vulliamy (his grandson) in 1854. 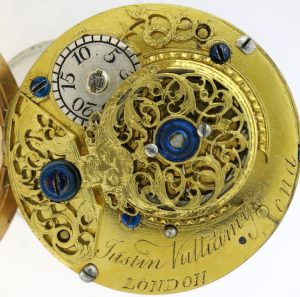 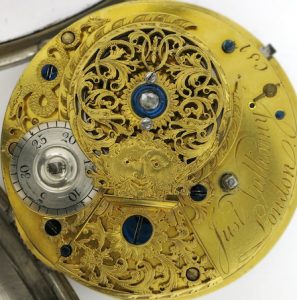