The son of Justin Francois Vulliamy, he was an able child. When 11 years old Benjamin Vulliamy obtained a Society of Arts premium for a drawing. He entered his father’s business in Pall Mall, but as his son Justin Theodore said, he was too engrossed in the improvement of Norland House, which he purchased in 1794, part of which had been a boarding school for boys.

One of Benjamin’s most well known pieces is the excellent regulator in the Science Museum in Kensington. It was made for George III and was formerly the principlal timekeeper in the King’s private observatory at Richmond where it stood in the Mural Quadrant room. It is fitted with a Harrison’s grasshopper escapement, with extensive use made of friction wheels for carrying the bearings of the wheel train. Gibbs Rigaud (whose son married Benjamin Vulliamy’s grand daughter) states that this regulator was used for many years as the standard for the regulation of clocks in the Houses of Parliament and the Horse Guards’ clock. Vulliamy was Clockmaker to King George III.

With his bracket clocks he made use of plaques and medallions supplied by Josiah Wedgwood and figures supplied by Duesbury. A number of his clocks were also decorated with marble statuary. Some excellent examples of his work can be found at Windsor Castle and Buckingham Palace. It was during Benjamin’s lifetime that the Vulliamy clocks and watches commenced to be numbered, but the date of commencement is not known. It is supposed that the better quality items were not included in the numbering sequence at this stage , but in Benjamin Lewis’ time (his son), all clocks and watches were numbered.

Benjamin was the first of the family to be connected with the Clockmakers Company. There is an oil painting of him in the Museum of the Clockmakers’ Company at the Guildhall, London. On his death in 1811 he was succeeded by his son, Benjamin Lewis Vulliamy.

Mantel Clock by Benjamin Vulliamy that is now in Derby Museum 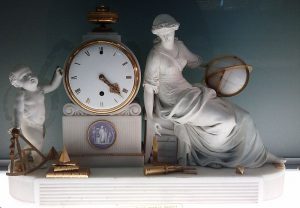