Born 1676. Little is known of this watchmaker, but in 1716 it is recorded that Thomas Richard Wakelin, at St. Giles in the Fields, was apprenticed to Benjamin Gray, watchmaker of St. Martin’s in the Fields, for the sum of 20 guineas. As his name does not appear in the rate books it is assumed he rented premises in St. Martin’s and lived elsewhere. There is some evidence he was in Pall Mall in 1727, but what is definite is that in 1738 he moved to St. James’ Street West, where he set up business at the sign of “Ye Sun Dyall in Thatched House Court”.These premises, along with others, were previously Lord Shelburn’s house, which was demolished.

In 1752 Gray then moved to 74 Pall Mall, by which time he had been joined by Francois Justin Vulliamy as his partner. The next three generations carried on the business from these premises. In 1821 Pall Mall was renumbered and 74 became 68, which is the number in operation today.

On 30th March 1742, King George II appointed Gray as his Watchmaker in Ordinary, in the place of Thomas Cartwright, for which he received a salary of £150. The catalogue of the Clockmakers Company museum refers to him in one instance as Watchmaker, and in another as Clockmaker.

The few pieces of his work which remain today are of a very high standard of workmanship, and also decorative and well ornamented. He was one of the first in England, if not the first, to make pedometers. He always signed his watches, but instead of numbering them he had a system of lettering to a code. Gray also made a few long case clocks that have survived, and some very attractive bracket clocks. His clocks were not numbered.

Three years after he formed a partnership with Francois Justin Vulliamy, his daughter Mary was married to Vulliamy. Gray died in 1764. 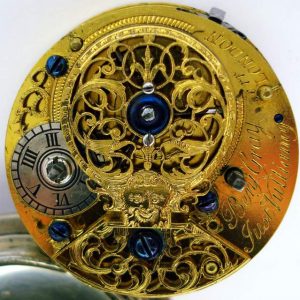 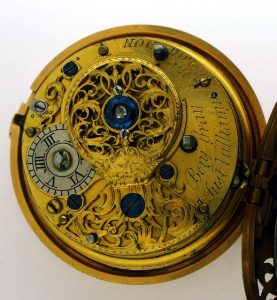