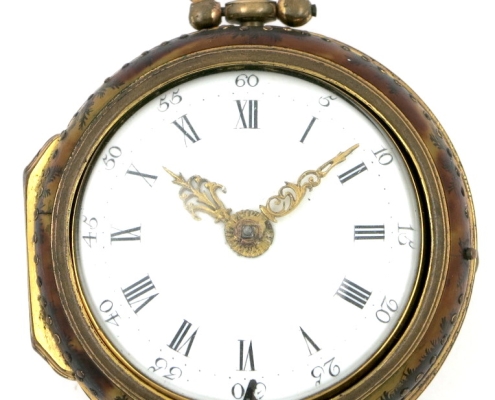 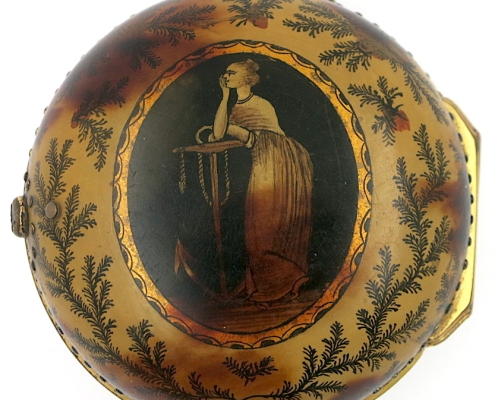 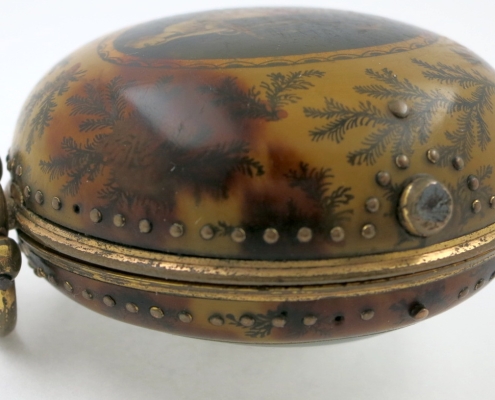 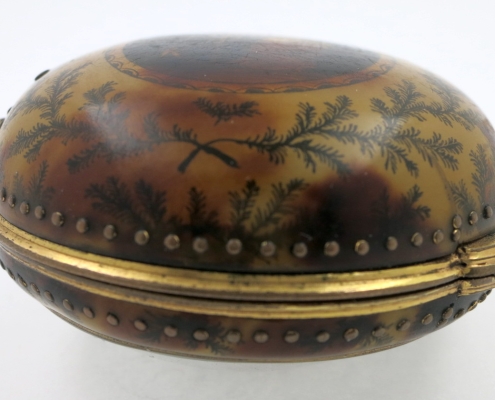 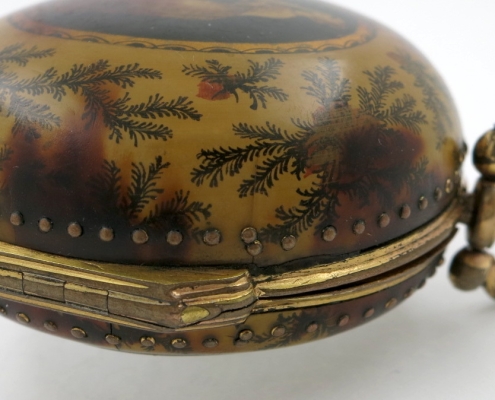 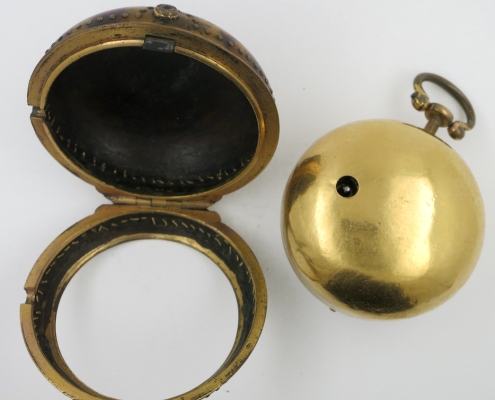 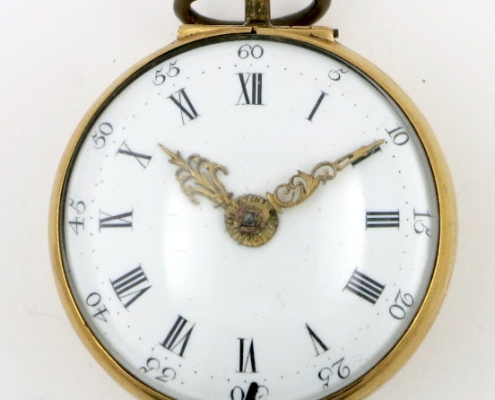 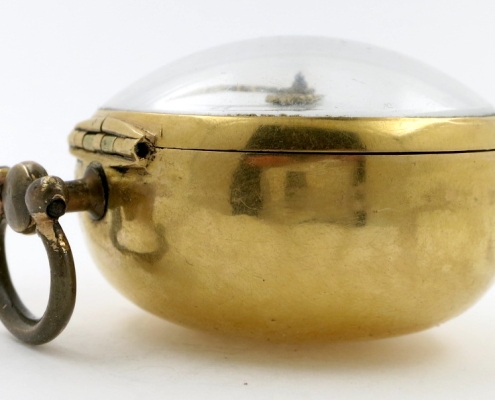 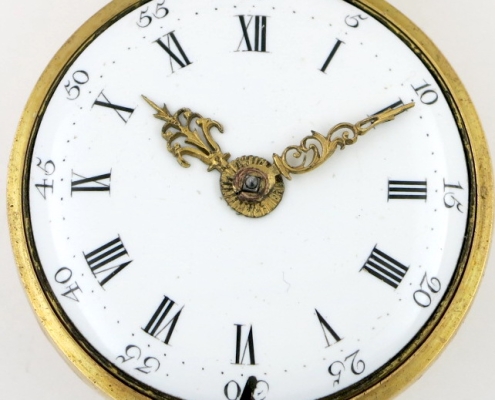 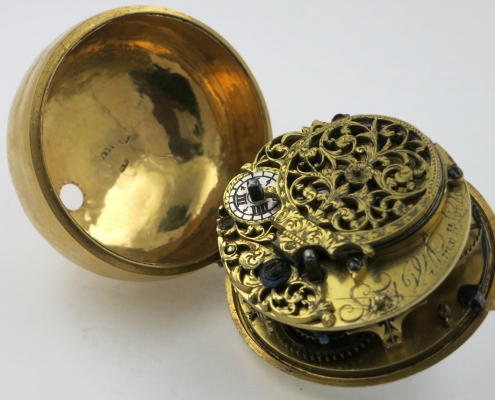 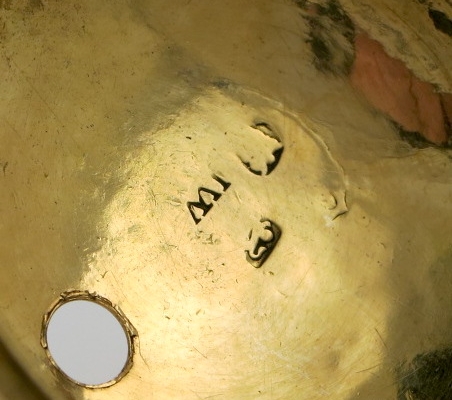 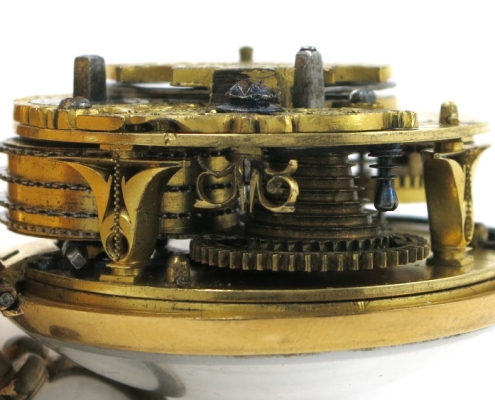 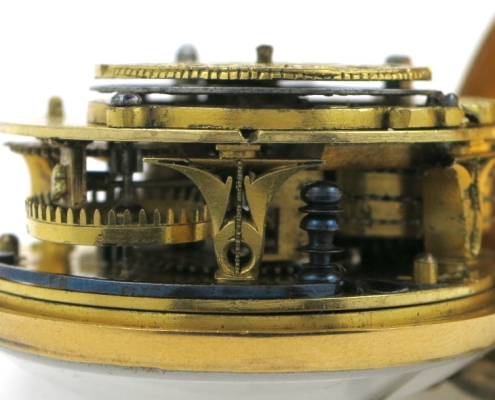 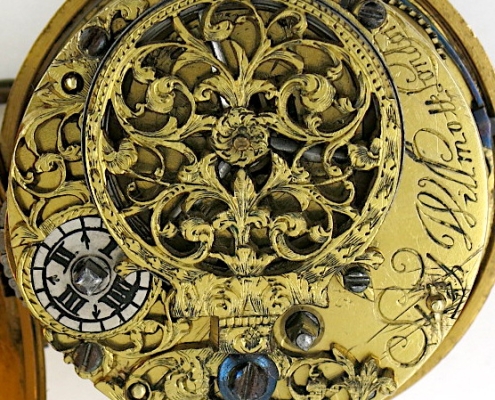 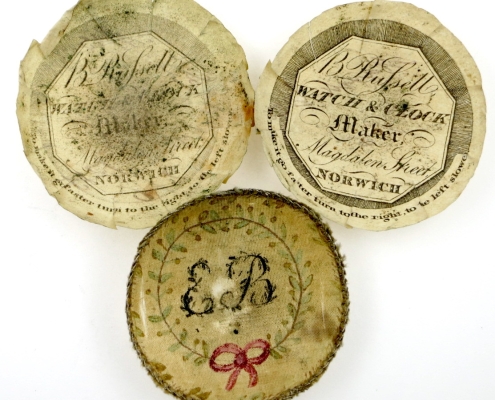 MOVEMENT : Gilt fusee movement, with verge escapement, engraved and pierced balance cock, four fine tulip pillars (as used by Thomas Tompion at this time), blued steel screws and small silver regulator disk. The balance has a reeded steel wheel (also found on Tompion watches) and the cock has a small foot with an irregular unframed edge, typical of London watches of the late 17th century.

Running well, and in good condition, though with a few scratches and patches of rubbing to the gilding, especially around the visible pillar top.

DIAL : A white enamel dial, in good condition with just one small chip at the opening catch.

This dial is later, probably mid to late 18thc.

In reasonable condition. The hinge is fine and the bezel snaps shut correctly. The high dome crystal has a few light scratches but otherwise ok. The bow and stem are mid 18thc. gilt brass replacements. The gold has a few small bruises to the sides and the usual slight compression around the side.

The year mark is very rubbed but appears to be a gothic ‘O’ for 1691. This corresponds with the maker and the style of the movement, so the inner case is probably original to the watch.

OUTER CASE : A later, mid 18thc. gilt pair case, covered with underpainted horn. Both bezel and back are decorated with underpainted seaweed, with an oval framed picture to the centre of the back. This shows a girl in 18thc. dress, leaning against an anchor. This image represents “The Sailor’s Farewell” and is sometimes seen on decorated cases of this period.

A beautiful case, in unusually good condition. The hinge and catch are complete and the case snaps shut. The catch button has worn down a little. There is no shell missing, and just one crack across the bezel and 3 short, light cracks on the edges of the back. Just one gilt pin missing from the bezel and one from the back. The colours are well preserved.

Stephen Willmott was apprenticed to Edward Stanton in 1667 and free of the Clockmakers in 1674. He died around 1721.

The outer case contains a charming hand painted lace liner, monogrammed EB, and edged with silver thread. The case also has two early 19thc. paper trade labels, from 1815 and 1826, supplied by a Norwich watchmaker. The older paper is also marked “Mrs. Burrows” so the lace liner may have been hers.

The movement and inner case appear to be original to 1691.The dial, hands and outer case are all later, so may have been added to the watch at the same time in the mid 18thc.