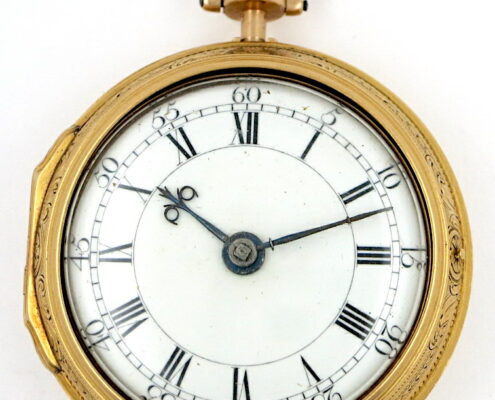 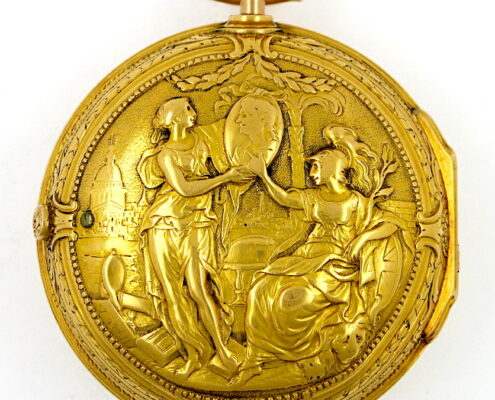 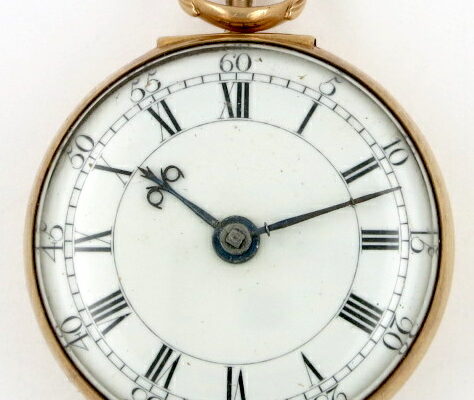 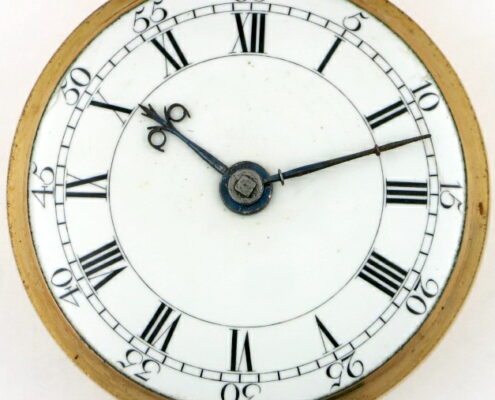 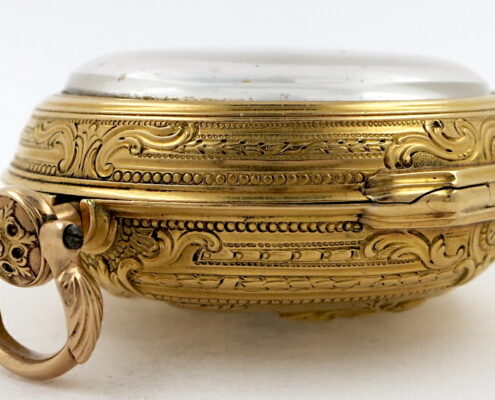 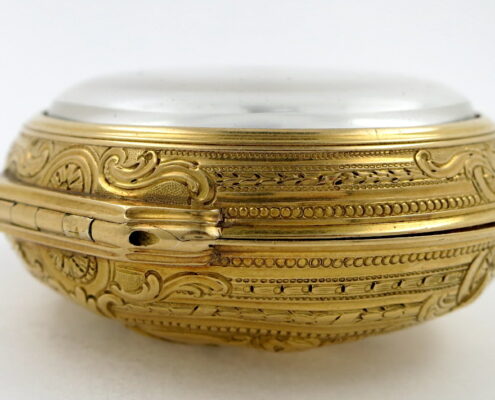 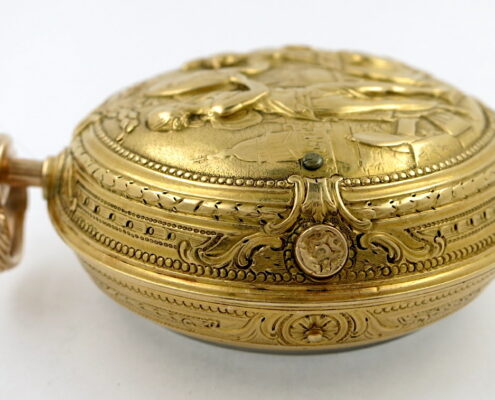 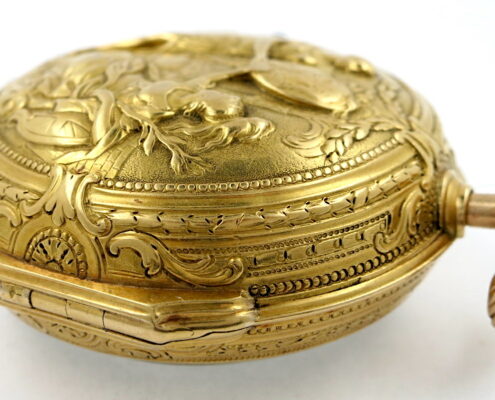 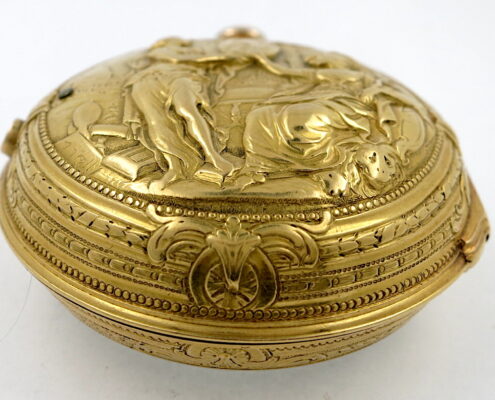 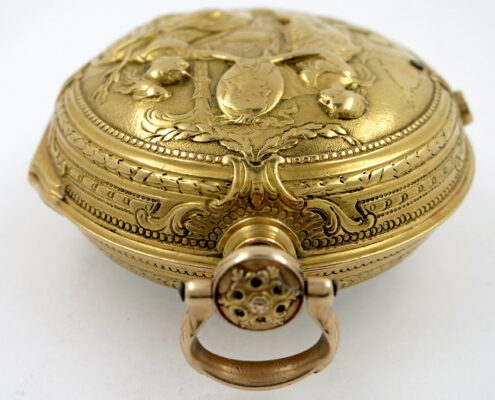 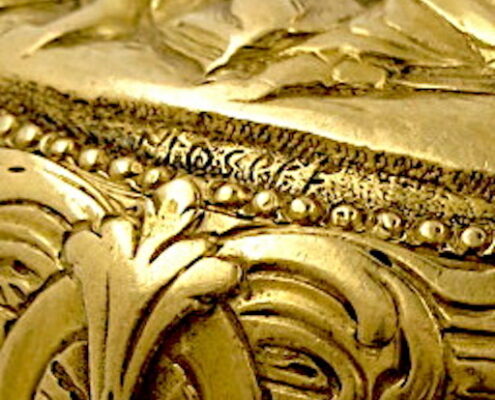 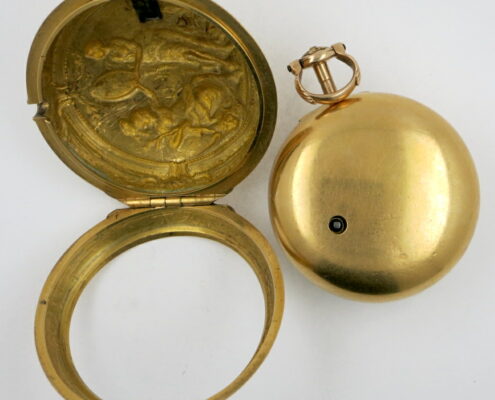 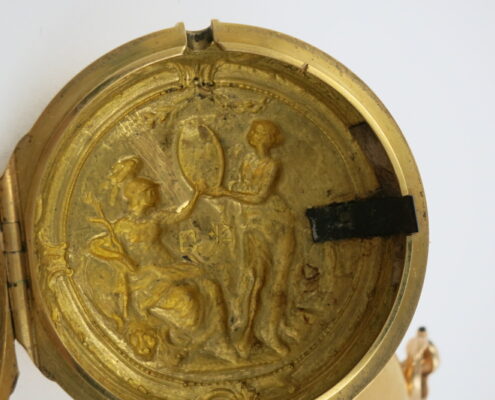 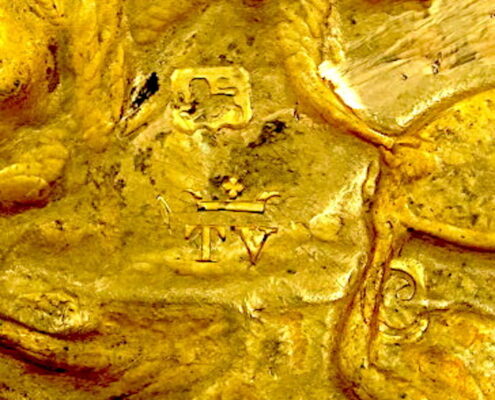 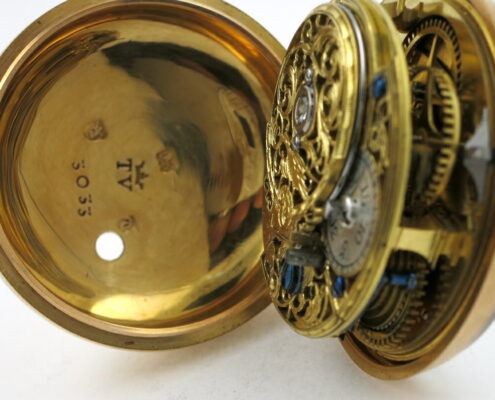 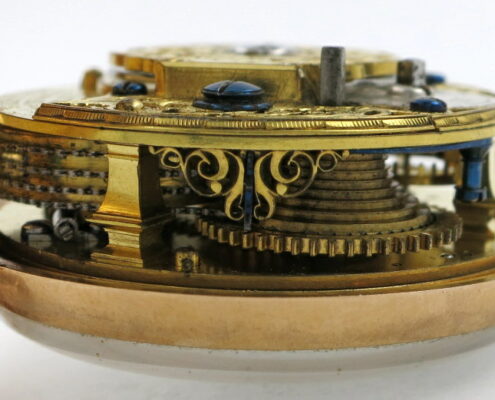 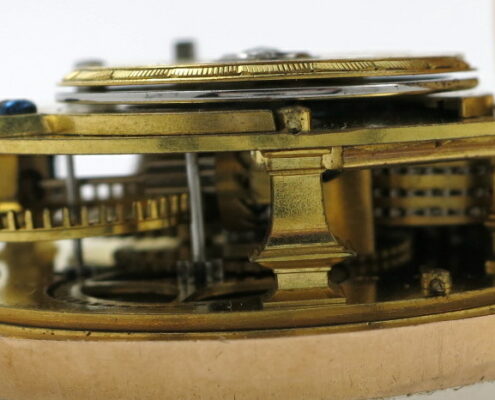 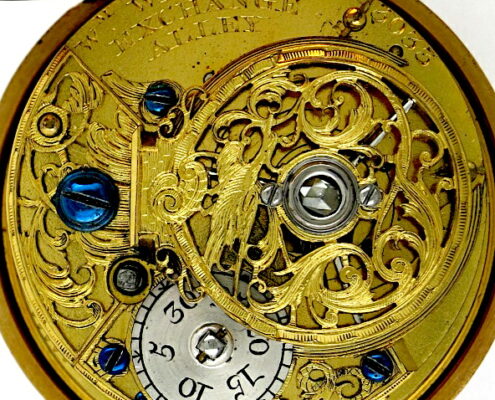 The movement is signed (WM. WEBSTER, EXCHANGE ALLEY) and numbered (3033).

All in very good condition, with the screw heads still undamaged. Running well.

DIAL : A fine white enamel dial, in very good condition, with just a couple of light, short scratches on the edge at 2 and 10.

INNER CASE : 22ct, gold case, with maker’s mark TV below a coronet, and the London year mark for 1775. The case is also stamped with the movement serial number (3033).

There is a little rubbing around the band and some light scratches on the back, but otherwise in very good condition. The hinge is fine and the bezel snaps shut correctly. The stem and bow are beautifully cast and in excellent condition.

The crystal is fine.

OUTER CASE : A rare and beautiful 22ct. gold, engraved and pierced case, with fine repousse work within a circular frame on the back, showing Britannia, Fame and a portrait of Sir Isaac Newton. With the City of London across the Thames as the background.

The case is made by and signed by George Michael Moser – Moser F(ecit).
Gold hallmarks for 1778, with case maker matching the inner.

The catch and hinge are fine and the bezel snaps shut nicely. The catch button is dented, but complete.
The repousse work is in good condition, with no holes or cracks and just a little wear to the high points.

REFERENCE :
This watch is photographed and described in detail in the key reference on 18th century London gold workers : THE ART OF THE GOLD CHASER IN EIGHTEENTH CENTURY LONDON by Richard Edgcumbe, 2000, p. 120.

The watch is listed as Moser No. 40. Here Edgcumbe explains that despite the gap in years between the two cases, the outer was purpose made for the watch. The unusual scene on the watch was also used by Moser for earlier watches by Mudge and another also by Webster.

PROVENANCE : Sotheby’s 18th December 1986, lot 14.
The collection of Dr Trevor Hyde, Sydney, acquired from the above.

William Webster is listed in the Clockmakers’ Company from 1734 to 1776.
He employed the renowned George Michael Moser, Keeper of the Royal Academy, to do the repousse work of some of his cases which are often signed by this artist.
William Webster link
The casemaker’s mark is for Thomas Venn, of Leather Lane, Holborn, London.