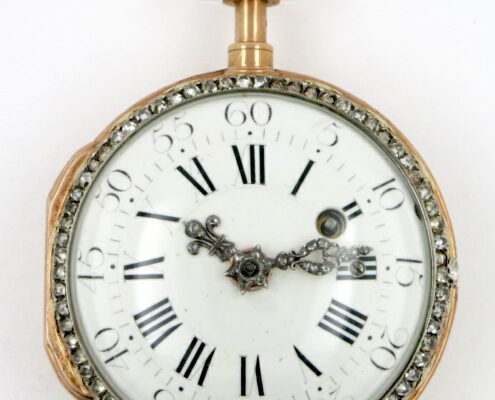 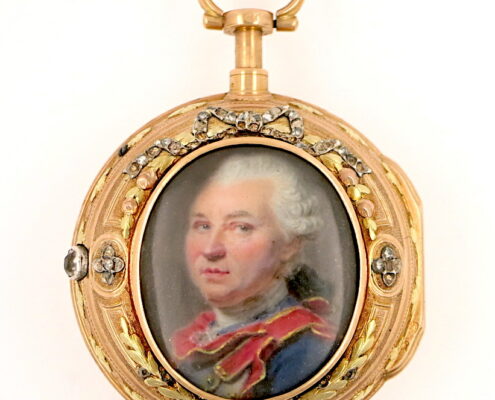 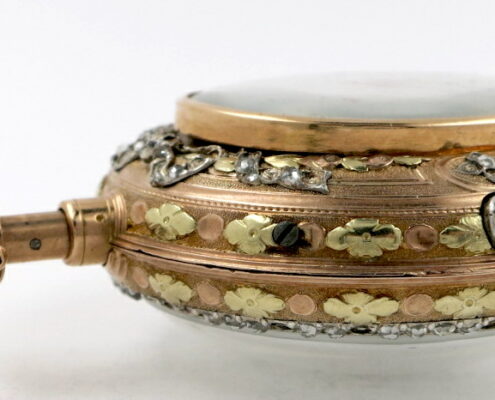 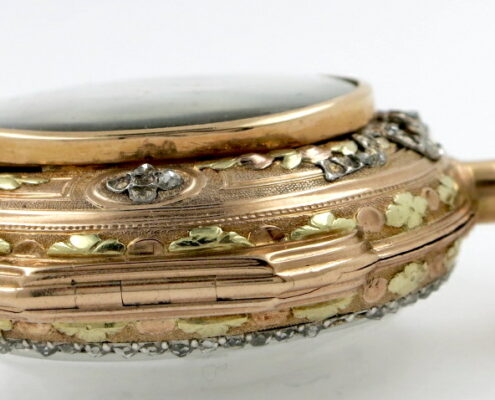 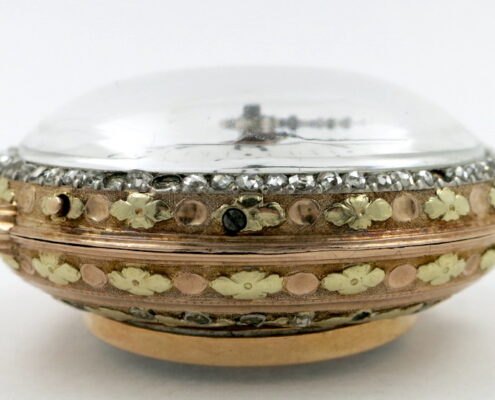 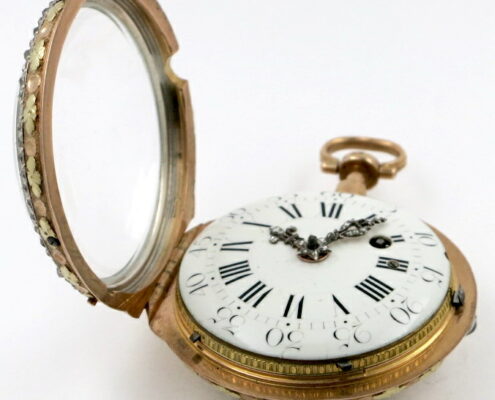 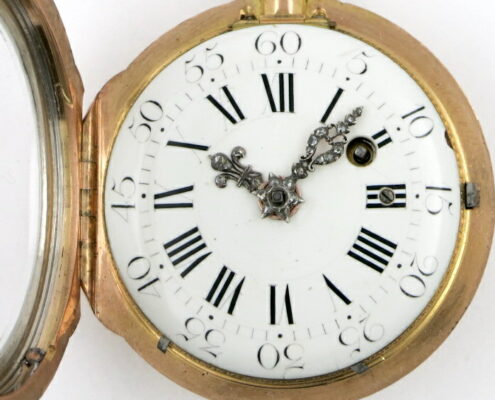 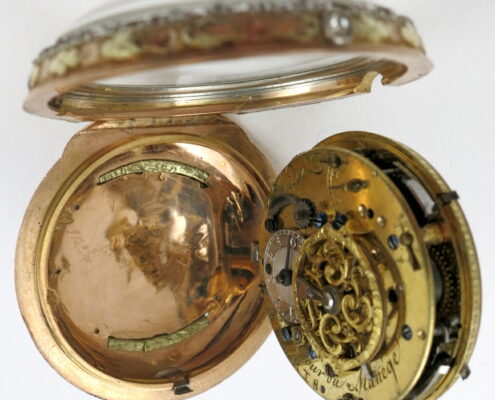 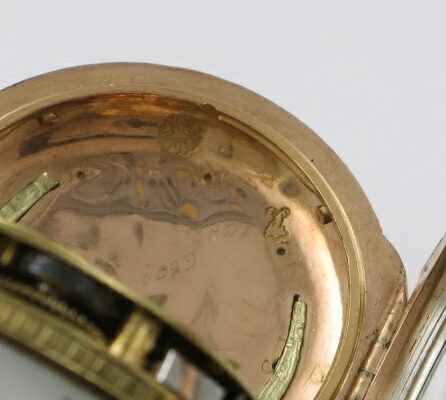 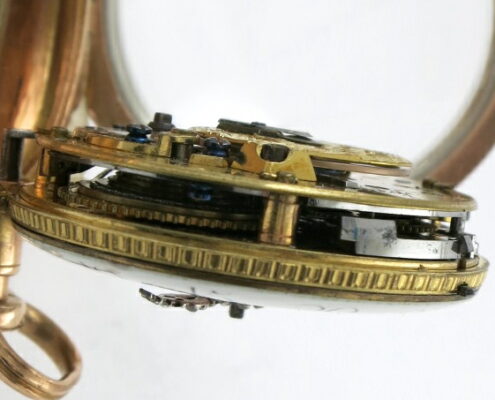 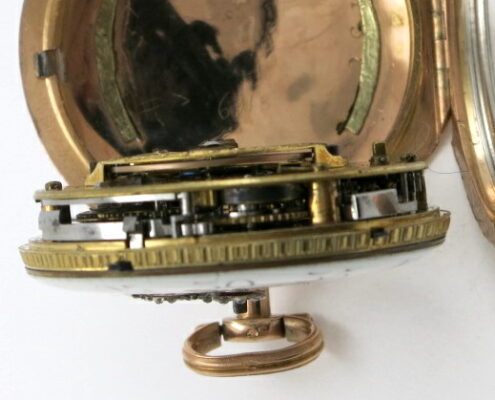 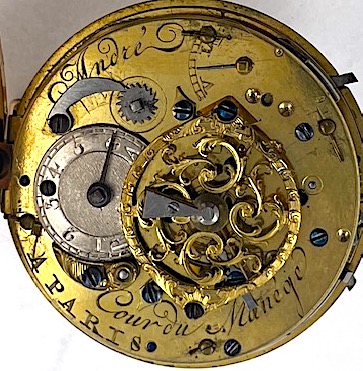 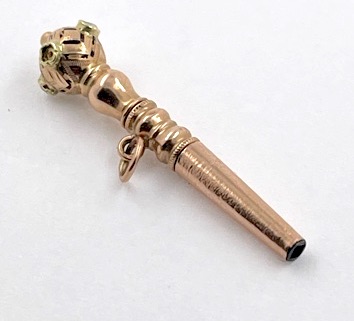 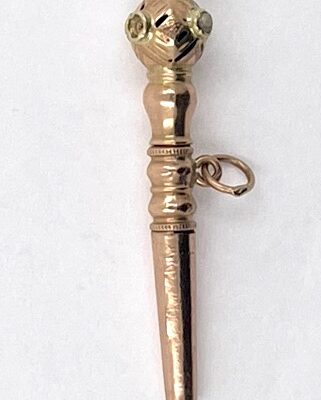 A French gold quarter repeating watch, with an early cylinder escapement, in a multi coloured gold case, with a particularly fine enamel portrait of Louis XVI.

MOVEMENT : A gilt movement with cylinder escapement, and dumb quarter repeating with two polished steel hammers striking two gold blocks on the inside of the case. Steel escapement wheel.

The quarter repeating function is activated by pushing down the stem. Striking once for each hour and then twice for each quarter.

The movement is in excellent condition, and is running well and repeating correctly.

CASE : The case is made from rose and yellow gold, with gem set bezel and borders, and an inset glazed painted enamel plaque showing a very fine portrait on Louis XVI.

The inside of the case, and the button on the stem, are stamped with Paris gold marks.

The small lever on the dial at 7 is a ‘pulse piece’ allowing the repeat to be silent but vibrating. This lever is intact and functioning correctly. The function is operated with the case closed, by pressing the stud on the bezel at 7.

The case is in good condition, with very little wear to the gold, and just a few gems missing, though the two larger stones (diamonds) forming the catch buttons are present.

The gold framed, glazed enamel portrait appears to be perfect. At some time after original manufacture this enamel has been added, as can be seen by the slits cut into the back which hold the gold frame of the enamel.

Both hinges are fine and the case snaps shut correctly. The high dome crystal is perfect

KEY : The watch is accompanied by a gold, pearl set ratchet key.
Very good condition. The ratchet works correctly and the square is strong with no wear. Two of the four tiny pearls are missing from the top.

This watch is probably by Noel Augustin André who was employed by the Manufacture d’Horologerie in Paris, and listed between 1771 and 1789.
The address probably refers to the Salle du Manège (“Riding Hall”), situated along the north end of the Tuileries Gardens.

Louis XVI was the last king of France before the fall of the monarchy during the French Revolution. He was executed by guillotine in 1793.