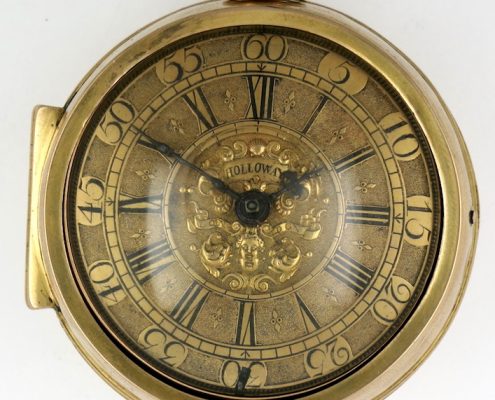 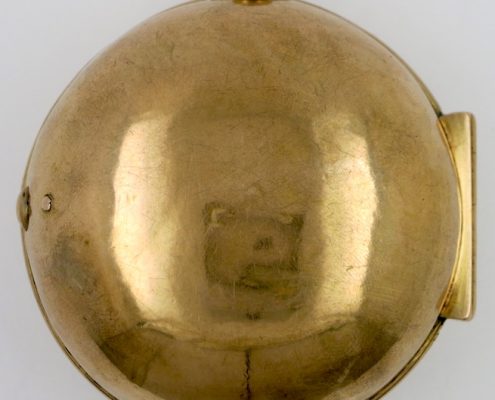 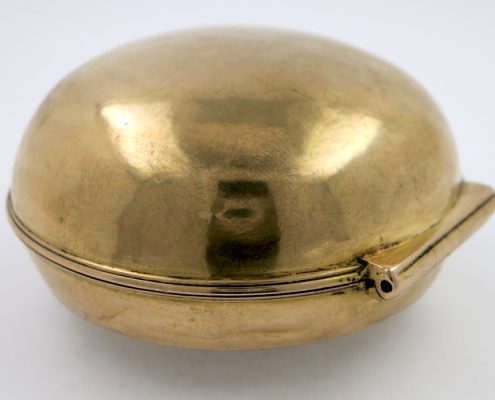 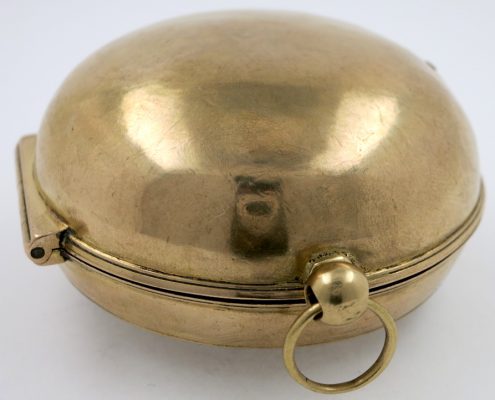 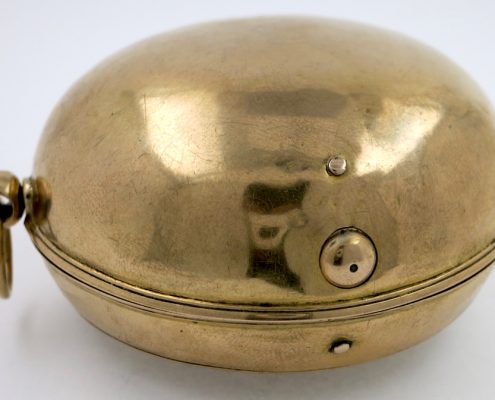 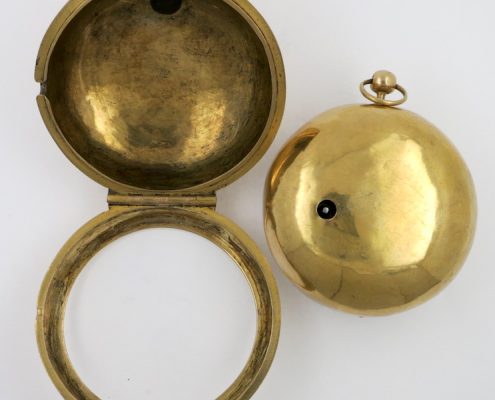 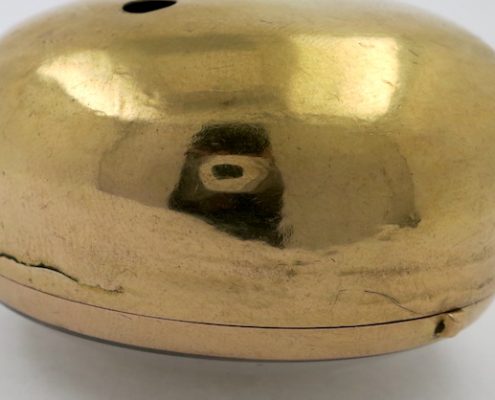 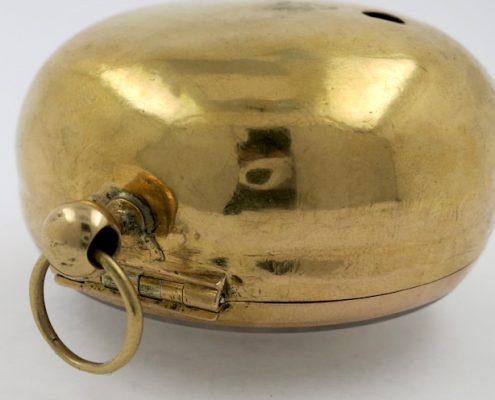 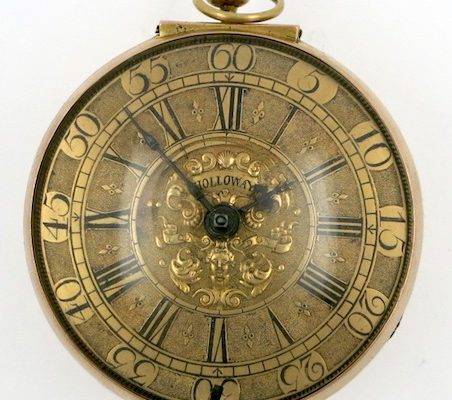 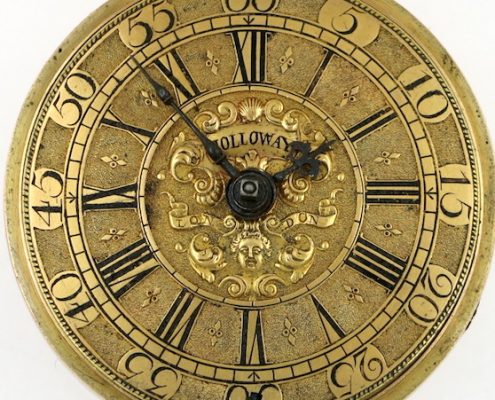 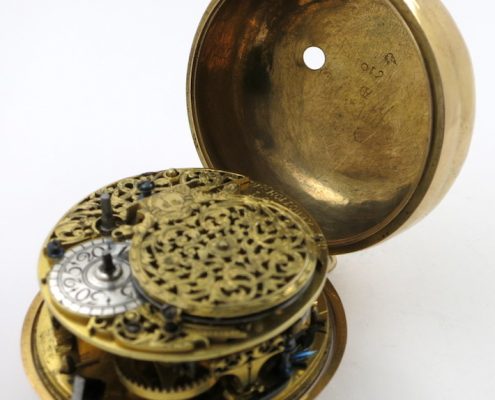 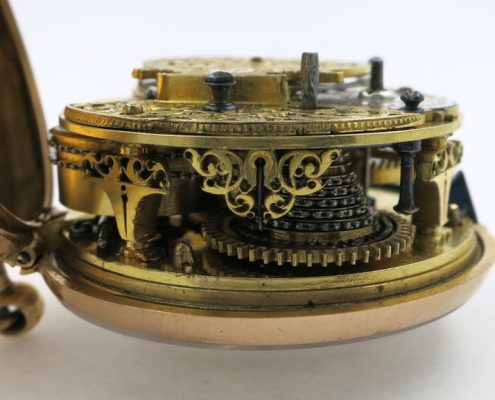 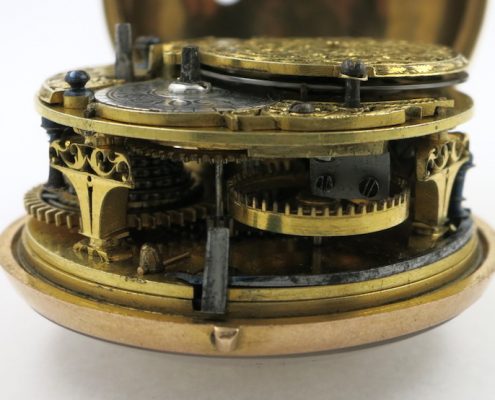 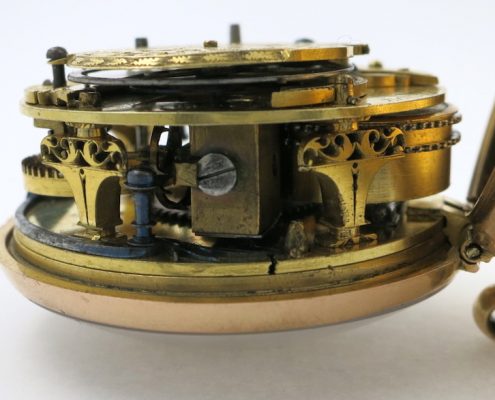 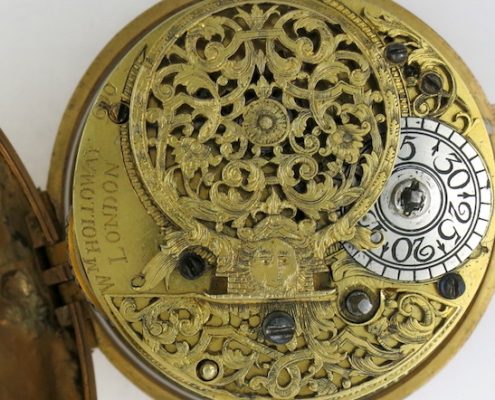 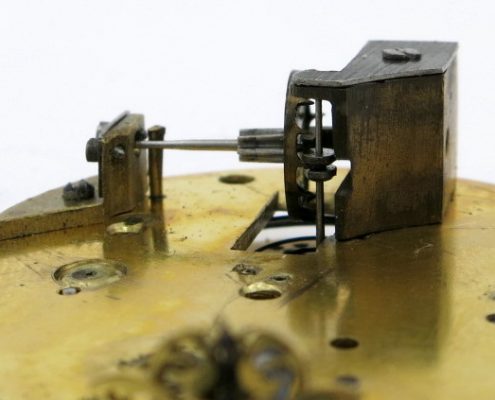 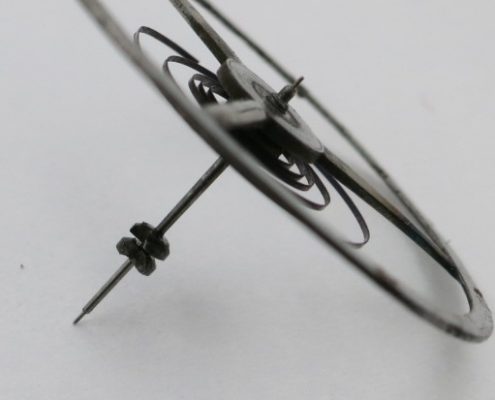 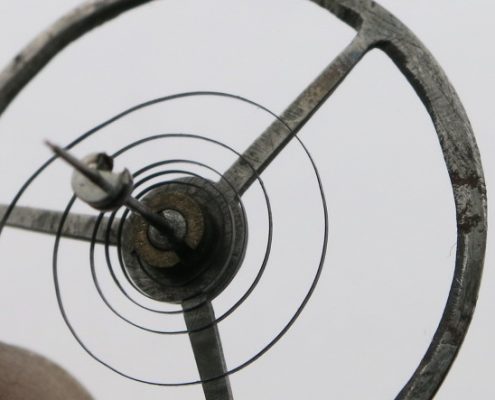 MOVEMENT : Gilt movement, with large, finely engraved and pierced, winged balance cock, four crested tulip pillars and large silver regulator disc. Signed (WM. HOLLOWAY, LONDON) and numbered (610).
The balance cock table has a small bracket on the edge, which allows it to be stabilised by a screw to the top plate. This feature is occasionally found on London watches of this period.
In good condition, though there is a crack (with an old repair) to the dial plate. This is strong, and hidden by the dial. Running well.

This watch originally had a standard verge escapement, but this has been replaced with a very unusual version of the Sully type.
The escapement has no pallets on the staff, but instead two discs mounted close together at the base of the staff, each with a sector cut out (offset from each other).  The escape wheel has narrow sharp teeth (though otherwise like a normal verge) but is mounted to the side of the balance staff, rather than centrally.  So the discs act against just one tooth at a time rather than two pallets on a normal verge acting against two teeth.
The potence adjustment has been converted to a French type, rather than the simpler English.

In good condition, with some wear to the base of the stem, which has been reattached, some compression around the band, and a short crack (13 mm.) just below the rim at 4.

The hinge is fine and the bezel snaps shut nicely. The high dome bull’s eye crystal is also fine.

OUTER CASE : 22ct. gold pair case, with a large square 7 sleeve hinge. No hallmarks except the Lion Passant on the bezel, and the maker’s mark AD stamped twice.
In very good condition throughout. The catch, catch button and hinge are fine and the bezel snaps shut.

William Holloway is listed in London, and in the Clockmakers’ Company between 1697 and 1723.
The case maker is probably Abraham Dearmer, apprenticed in 1692 to Thomas East.

NOTES ON THE ESCAPEMENT: The escapement in this watch is of the type developed by the Englishman Henry Sully while working in France in the early 18th century. Sully’s escapement was based on Debaufre’s design of about 1720.

The variation on the Sully type, as found in this watch, is very unusual, but there are 2 similar examples in the British Museum collection which, although classed as Ormskirk, do not have the normal double wheel. Both have rivoted English style potence set up rather than the French style, as with this watch. Both of these examples were made in Ormskirk, in the late 18th century.

The escapement in this watch was probably added in France, during the mid 18th century.