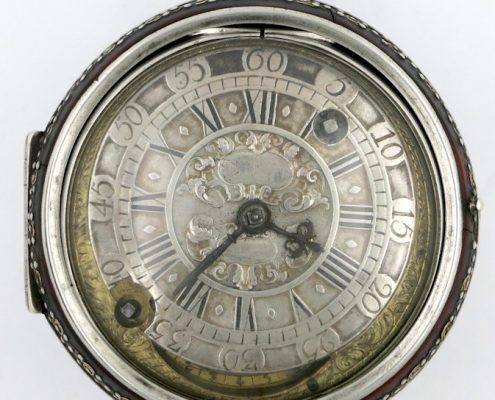 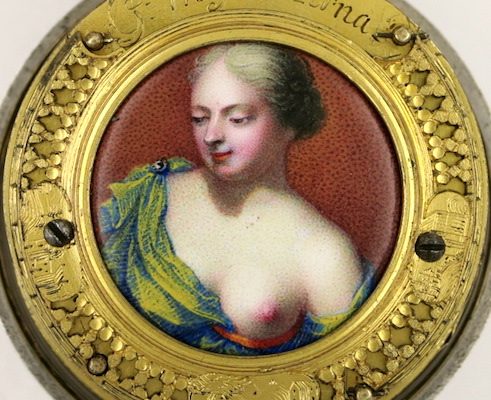 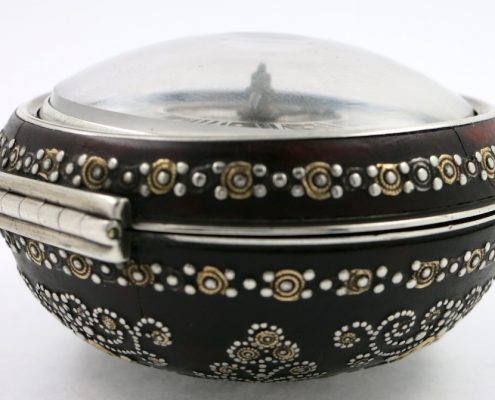 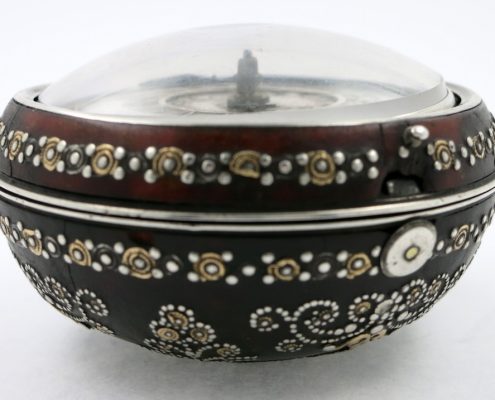 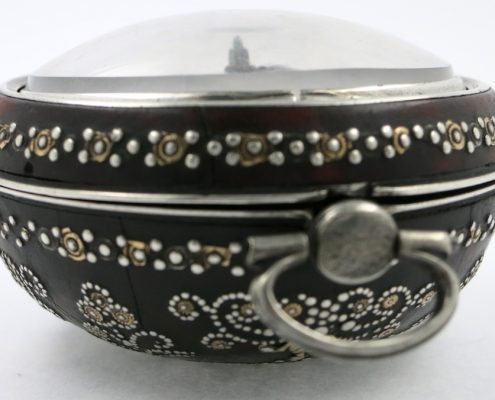 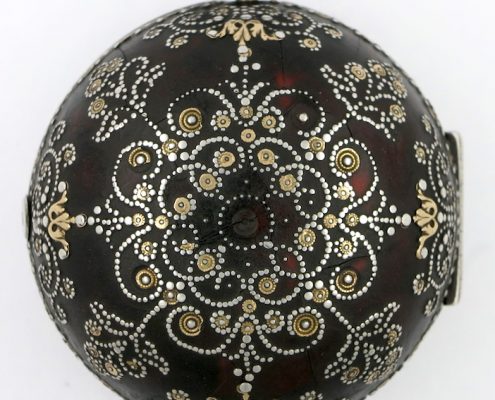 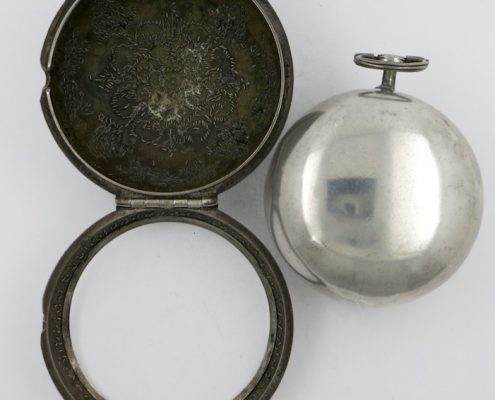 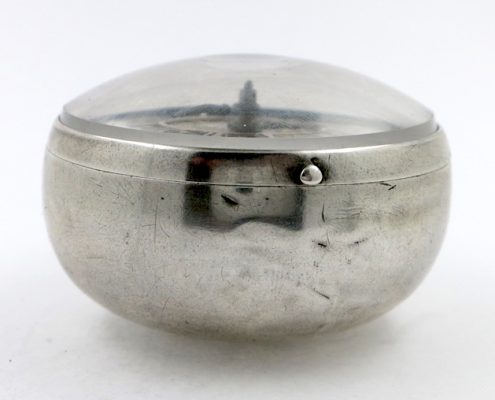 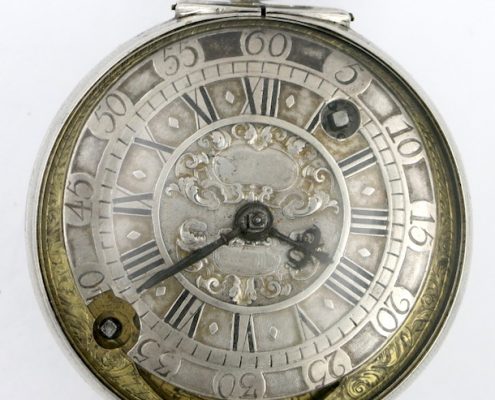 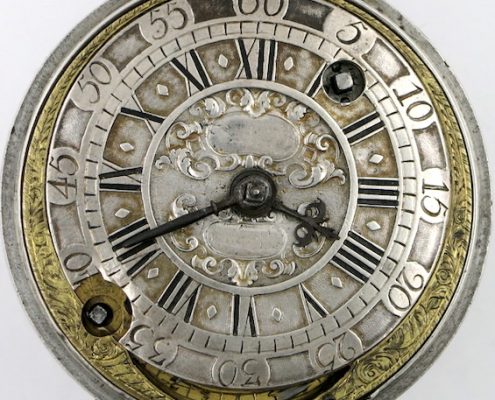 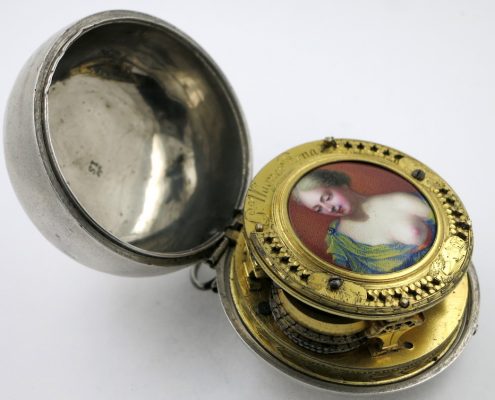 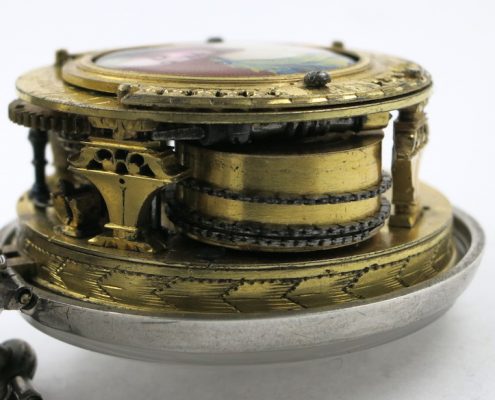 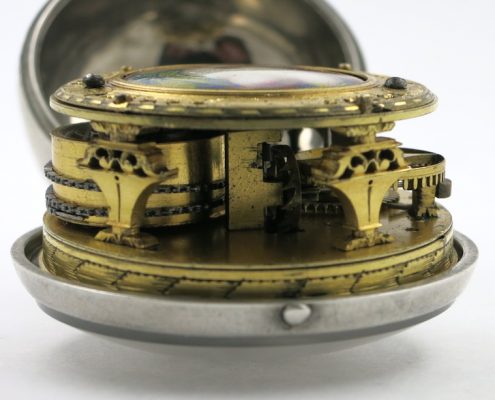 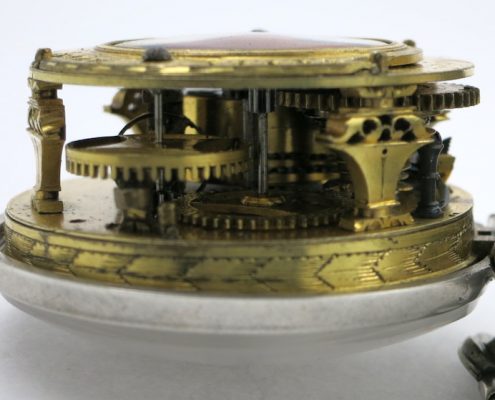 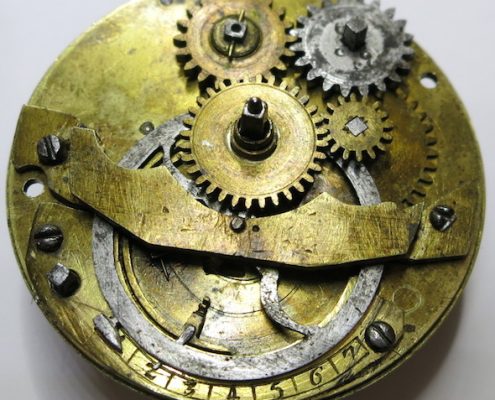 A most unusual, and beautiful, verge watch, with many unusual features, made in Germany in about 1720.

MOVEMENT : Gilt verge movement, with visible escapement and regulator adjustment both through the dial. Four crested tulip pillars. Winding is via a subsidiary wheel mounted on the dial plate, rather than directly from the fusee. The fusee cone is cut in reverse, so the movement runs in the opposite direction to normal, right up the the escape wheel. Steel balance wheel with two spokes.
The top plate is signed (J. Wagner, Pirna), and decorated with a wonderful enamel plaque, framed by a pierced gilt border.

The movement is in every good condition throughout and running well. One of the dial false plate feet is screwed onto the dial plate rather than pinned (as the other).
The enamel is in wonderful condition, with just a couple of tiny marks which I believe are firing marks.

DIAL : Silver champleve dial, with engraved gilt surround, and apertures for winding, regulating and a window showing the swinging balance and the regulator indicator.

The dial is unsigned (both cartouches blank) or the signature removed. However the dial appears to be original to the movement and is a perfect fit to the recess in the gilt surround.
There appears to be a little damage to the silver dial at the regulator aperture, or some decoration missing. Otherwise the silver is fine.

Original early 18th century steel beetle and poker hands, though the minute hand has lost the tip so is a little short.

INNER CASE : Silver, with maker’s mark IS (crowned). In quite good condition with a few light bruises to the back and the pendant has been reattached. The bow appears to be a later replacement. The movement does not lock fully against the case when closed but the bezel snaps shut nicely and holds the movement firmly. The hinge and high dome bull’s eye crystal are both fine.

This case is in very good unrestored condition. There are very few pins missing though the central boss in the middle of the back is missing.
On the back there are a few short cracks but no shell missing, loose or distorted.
On the bezel, just one short crack and a little damage around the catch.
The catch is complete and the bezel snaps shut.

This case is slightly bigger than the inner case so I don’t believe is original. It is also probably a little older, possibly late 17th century.

Wagner is listed in Pirna, Germany in the mid 18th century, but this watch is a earlier.
A table clock, made by Johann Heinrich Wagner, from about 1720, was formerly in the Wuppertal Clock Museum and subsequently sold by D. Crott Auctions of Frankfurt.

PROVENANCE : This watch was formerly in the collection of Georges Baptiste, antique dealer and former President of BRAFA (Brussels Art Fair).