Unfortunately little is know of the history of this fine clock and watchmaker. He was probably the son of the Reverend Ludovic Dunlop, who was a clergyman in Aberbeen from 1649.

Andrew Dunlop became a Freeman of the Clockmaker’s Company in 1701. He was an innovative maker, displaying superb workmanship.

He was married in 1702 to Alice House, with his address given as Spread Eagle Court, Gray’s Inn Lane, London. However little else is documented about his personal life.

Conyers Dunlop is believed to be Andrew’s son and was apprenticed to him from 1725 for seven years. He became a Freeman of the Clockmaker’s Company in 1733 and Master in 1758. He died in 1779. 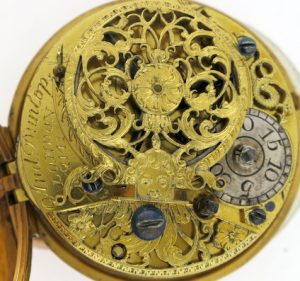