Born in Exeter, Devon in 1715, the second son of Reverend Zachariah Mudge, Thomas Mudge was an English horologist best known for his invention of the detached lever escapement (c.1757).

Zachariah Mudge was vicar of St.Andrew’s church in Plymouth. He was born in 1694 and had three children born in Exeter – Zachariah, Mary and Thomas. He had two further children born in Bideford – Richard and John.

Thomas was apprenticed to George Graham in Water Lane, Fleet Street. Graham had himself been trained by Thomas Tompion. After completing this apprenticeship Mudge married Abigail Hopkins, who was the daughter of an Oxford gentleman.

Thomas Mudge later went into partnership with another of Graham’s apprentices, Matthew Dutton. He became a Freeman of the Clockmaker’s Company in 1738.

Mudge was commissioned to make watches for the Spanish King Ferdinand VI. His book Thoughts on the Means of Improving Watches, Particularly those for Use at Sea was published in 1765 and from 1771 he worked on the development of marine chronometers.

Following the purchase of one of Mudge’s lever escapement watches by King George III, Thomas Mudge was appointed watchmaker to the King in 1776. He was buried at St Dunstan-in-the-West, Fleet Street in 1794. 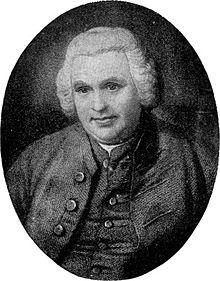 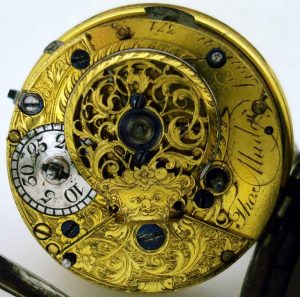