Christopher Pinchbeck was a London clockmaker based originally in St Georges Court, Clerkenwell, who then moved to Fleet Street in 1721.

Well known for his invention of the alloy, ‘Pinchbeck’, a substitute or imitation gold, which comprised of zinc and copper, Christopher Pinchbeck was also a maker of barrel organs for churches, and fine musical and astronomical clocks. He exhibited at fairs such as Bartholomew’s Fair, where the Prince and Princess of Wales visited him, and also at Southwark.

Pinchbeck died at the age of sixty-two and was buried in St Dunstan-in-the-West, Fleet Street

In 1738 he left Fleet Street and his father’s shop, but continued to sell pinchbeck alloy trinkets and timepieces. Known to have been working in Edinburgh for a short time in 1745. Clockmaker to King George III, by Royal appointment, Buckingham Palace now houses one of his astronomical clocks, he was also made an honorary Freeman of the Clockmakers’ Company in 1781. He died at the age of seventy-three and was buried at St Martin-in-the-Fields.

Another son, Edward Pinchbeck continued his father’s work, selling the alloy and also repairing musical and repeating clocks and watches. 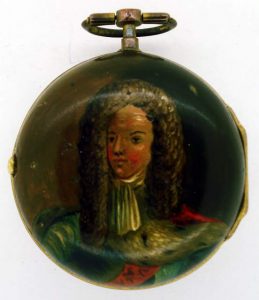 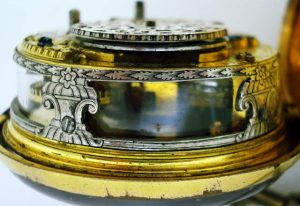