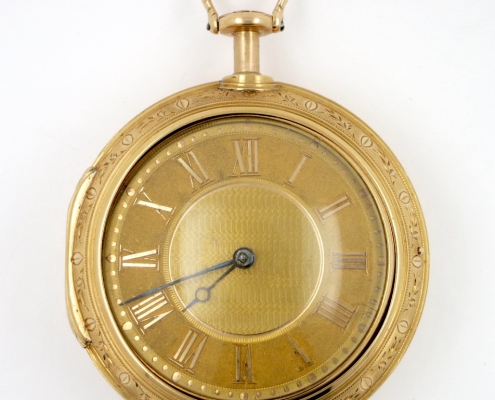 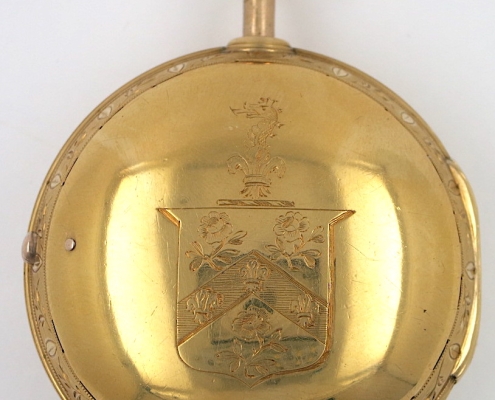 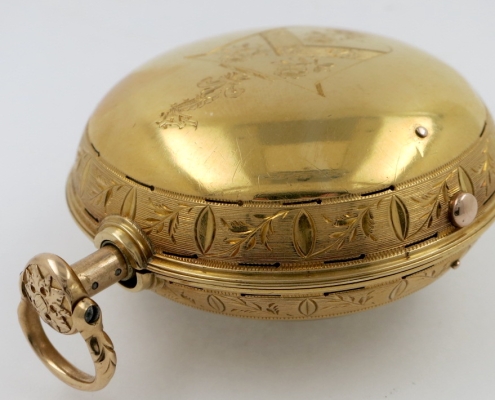 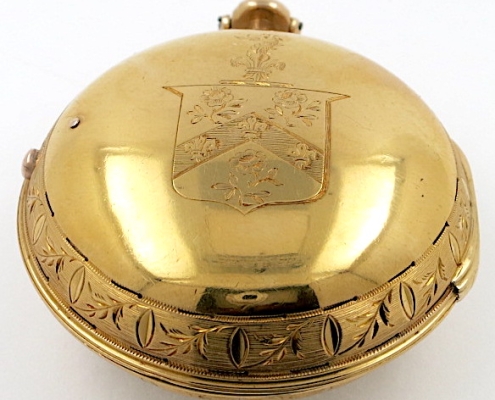 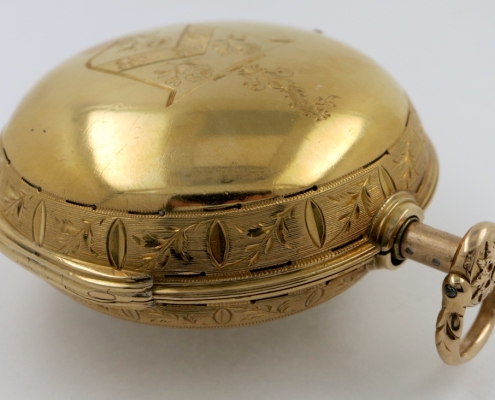 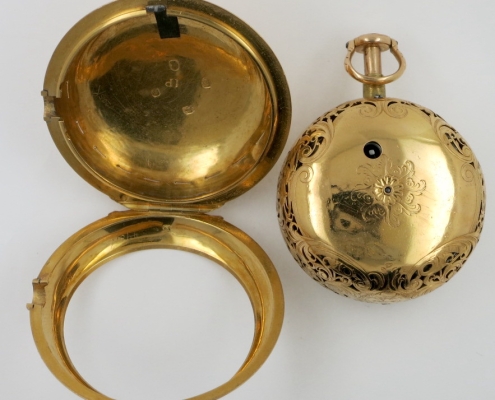 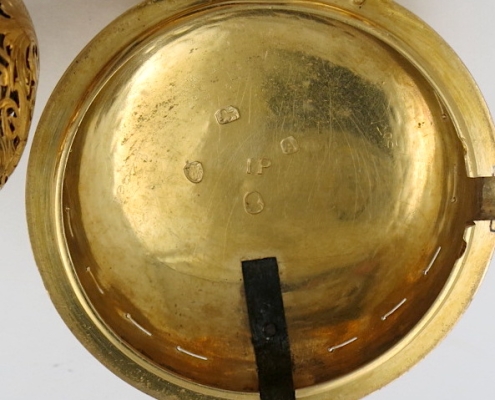 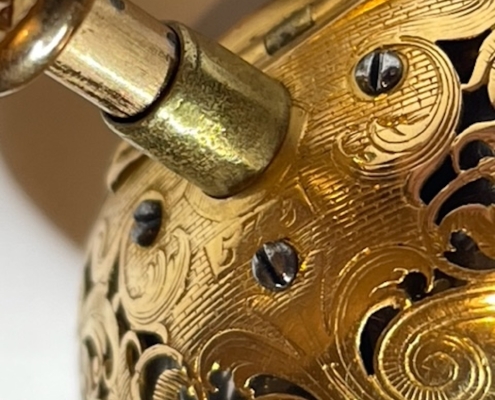 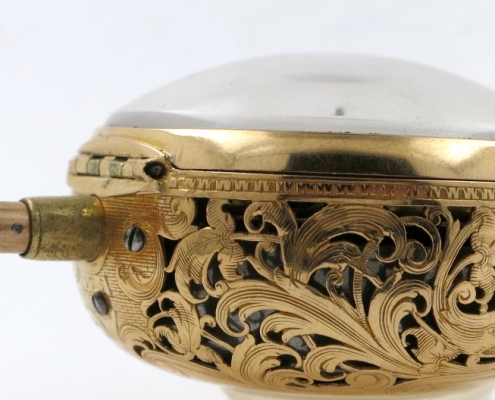 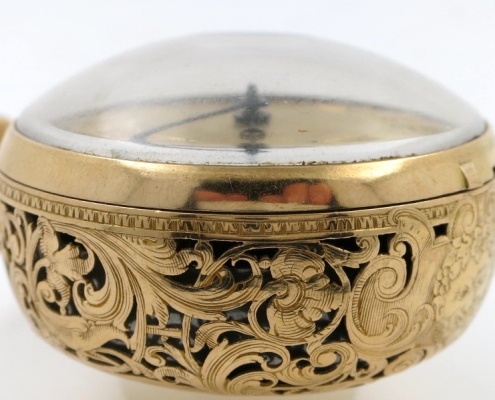 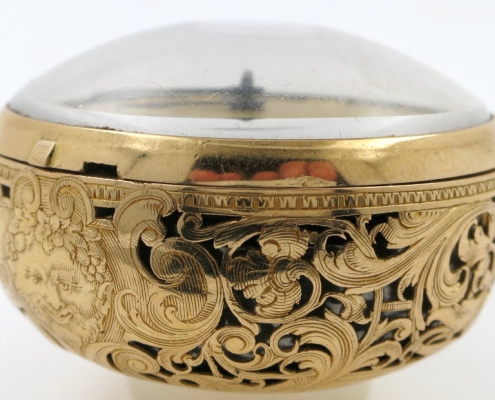 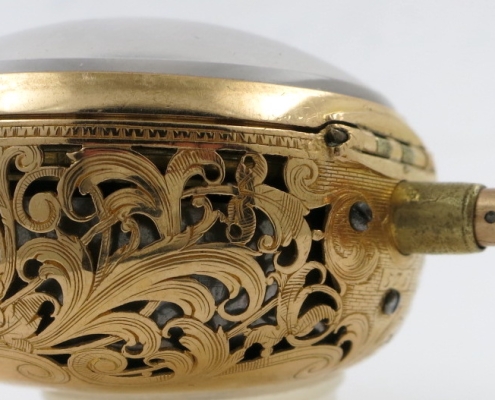 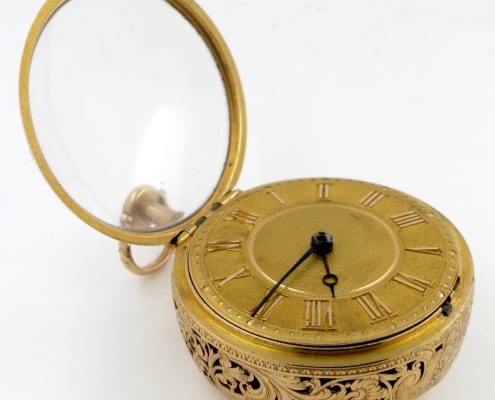 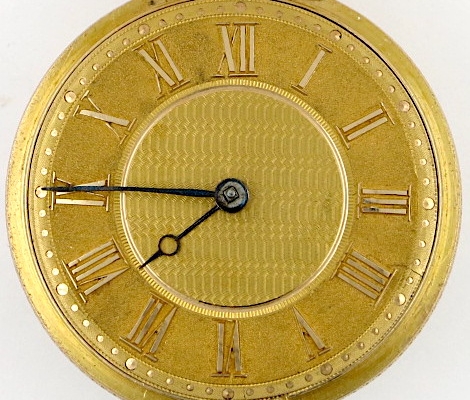 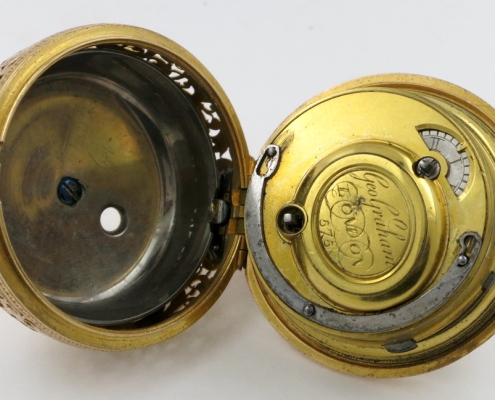 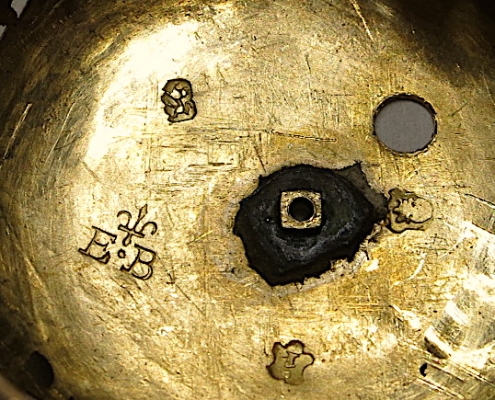 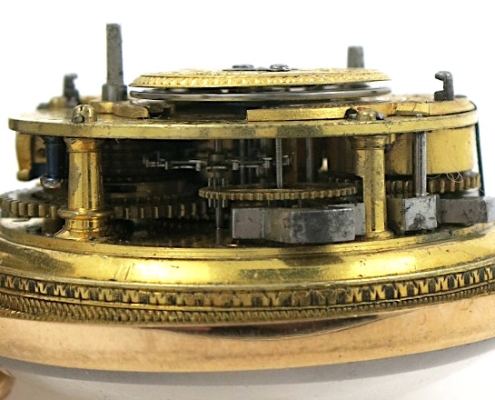 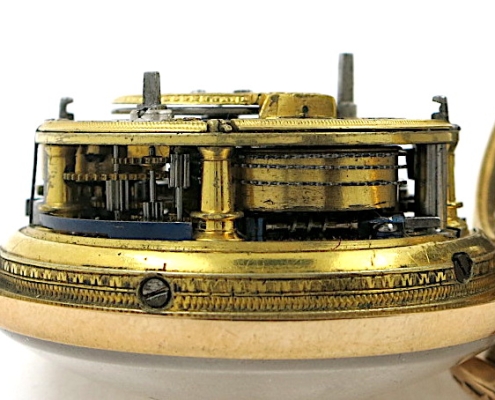 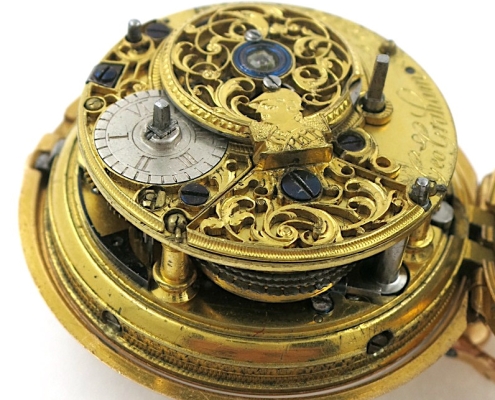 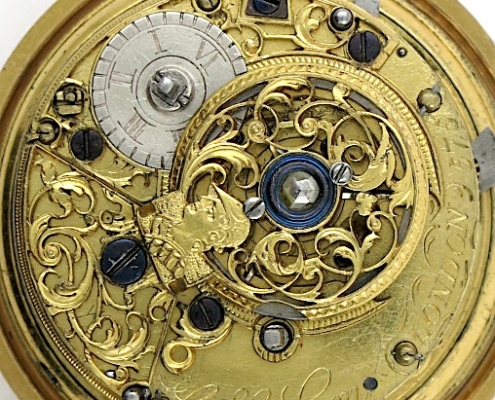 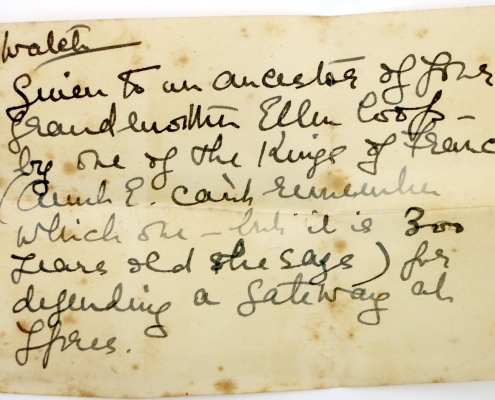 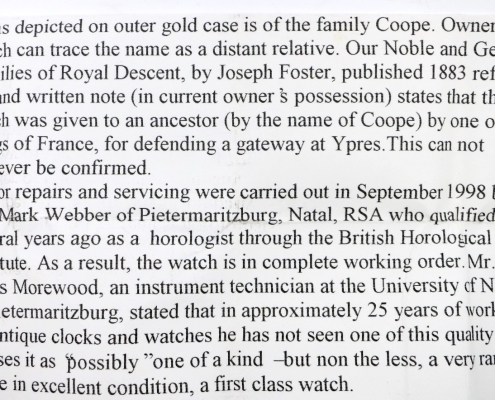 The movement is in good, complete condition, and is running well.

The repeat function works correctly, chiming clearly when the pendant is pushed down. This causes striking of the internal bell with two polished steel hammers.
The pulse piece which should allow the chime to be disabled by pressing a lever at the base of the dial near 7, is missing (often the case with repeaters of this period).

The movement is protected by a removable gilt dustcap, signed ‘Geo Graham, LONDON’ and numbered as the movement.

INNER CASE : 22ct.gold, with London hallmarks for 1744 under the bell with the maker’s mark ‘EB’ (under a fleur de lys). Beautifully pierced and engraved, with the movement serial number (575) engraved just below the stem.

In excellent condition. The hinge is fine and the bezel snaps shut correctly. The gold stem and bow are also in very good condition. The bull’s eye high dome crystal is good.

OUTER CASE : A later 22 ct. gold pair case with London hallmarks for 1796, and maker’s mark IP. Engraved decoration to the bezel and back. The centre of the back is beautifully engraved with a family crest (see below). The bezel and band are pierced with slits (sound holes).

In excellent condition. The hinge, catch button and catch are all fine and the bezel snaps shut correctly. This is quite a substantial outer case, weighing about 36.5 gms.

The inner case maker’s mark is probably for Edward Bradshaw, sometime at Puddle Dock Hill, Blackfriers, London, from about 1734. The hallmark on this case is for 1744 although the movement was made in 1727 or 1728. The case doesn’t appear to be a replacement (it is engraved with the movement number 575), so perhaps the movement was cased 16 years after manufacture for some reason ?
The outer case maker’s mark is probably John Penny of Aldersgate, London. This case is hallmarked for 1796, and was probably commissioned specially for this watch by the owner, having the case engraved and the dial replaced at the same time.

REFERENCE : This watch is listed in “Thomas Tompion 300 Years” by Jeremy Evans, Jonathan Carter & Ben Wright. This excellent book includes lists of movement serial numbers for Tompion and his successors. This reference indicates that No. 575 is one of the earliest repeating movements made with a cylinder rather than verge escapement (the first was No. 562). This reference confirms that the watch has a replacement gold outer case, with a coat of arms, dated 1796, and a replaced gold dial.
The coat of arms on the back of the outer is for the Coope family, and a recent owner traces this name to a distant relative. A hand written note, accompanying the watch, states that the watch was given to an ancestor (named Coope) by one of the Kings o f France, for defending a gateway at Ypres. This cannot be confirmed, but notes attached.